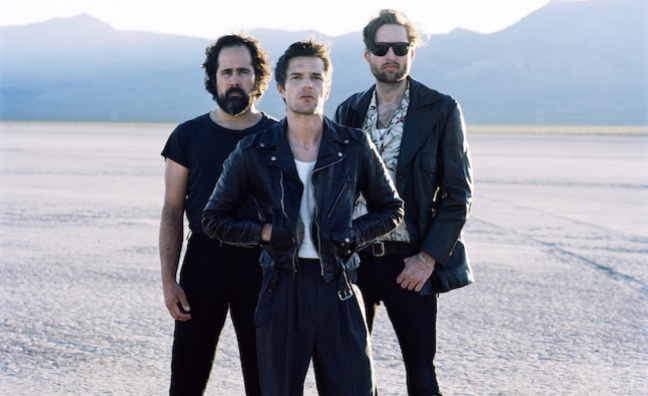 As well as securing their first ever No.1 in their US homeland, Las Vegas legends The Killers are kicking up a desert storm around the world with their fifth album, Wonderful Wonderful, opening atop the chart in the UK and Ireland, No.3 in New Zealand, No.7 in Flanders, No.8 in Germany, No.12 in The Netherlands, No.9 in Argentina, No.14 in Wallonia and No.28 in Sweden.

No.1 in Flanders, Ireland, The Netherlands, New Zealand, Norway and The UK last week, and breaching the Top 10 in a further six countries, Foo Fighters' seventh studio album Concrete And Gold slips from its debut position in all of them but now opens at No.1 in Austria, Australia, Canada, The Czech Republic, Norway, Switzerland and The USA, No.2 in Argentina and Denmark, No.3 in Finland and Spain, No.4 in Croatia, No.6 in Hungary, No.9 in Slovakia and No.14 in France and Greece.

He was the drummer in The Beatles who got tossed novelty songs that suited his limited vocal range but at the age of 77 there is still a market for Ringo Starr whose 19th solo studio album Give More Love includes a cameo from fellow surviving Beatle Paul McCartney, Jeff Lynne, Dave Stewart and Peter Frampton among others. It is his most widely-charted album in some time, opening at No.18 in The Czech Republic, No.43 in Wallonia, No.49 in France, No.51 in Switzerland, No.65 in Austria, No.69 in Germany, No.71 in Spain, No.94 in Flanders, No.103 in France, No.105 in the UK and No.128 in the USA.

Gary Numan's 21st studio release, the concept album Savage (Songs From A Broken World) became his highest-charting album in the UK since 1980 when it debuted at No.2 last week. Admittedly its achievements elsewhere were less impressive but it is also his biggest album in The USA since 1980, debuting at No.154, while it opens at No.76 in Australia, where he hasn't charted for 32 years. It also charts at No.12 in Ireland, No.59 in Flanders, No.87 in Germany, No.89 in Wallonia and No.94 in Switzerland.

Cornish singer/songwriter Fin Greenall - who records as Fink - reached No.109 in the UK with Hard Believer in 2014 but none of his other eight studio albums has breached the Top 200 here, including the latest, Resurgam, which has more success elsewhere, debuting at No.39 in The Netherlands and Switzerland, No.47 in Austria, No.72 in Flanders, No.84 in Germany, No.165 in Wallonia and No.171 in France.

Spreading well beyond their initial catchment area of Asia, South Korean K-pop septet BTS' latest release - the EP Love Yourself: Her - had its appearance in the chart in 10 territories documented hereabouts last week. Although falling rapidly in all of them, it now adds debuts at No.2 in Japan, No.3 in Canada, No.7 in The USA, No.8 in Australia, No.14 in Finland, No.16 in Norway, No.17 in Austria and Slovakia, No.26 in Switzerland, No.33 in Spain, No.34 in Denmark, No.40 in Hungary and No.96 in France.