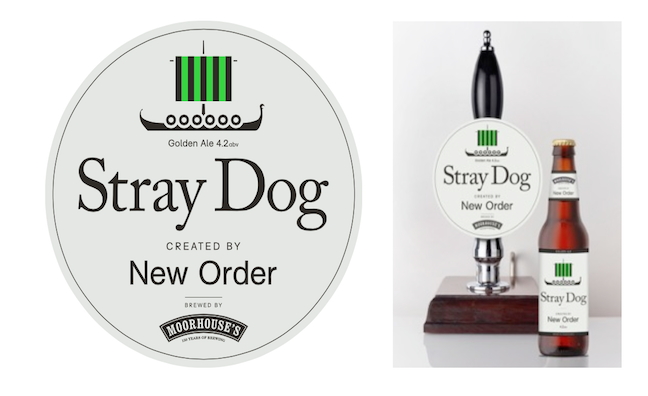 Indie rock icons New Order are to release their own beer dubbed Stray Dog in partnership with Moorhouse’s of Burnley brewery.

The Manchester group join a long line of bands to release their own branded range of alcohol products. Among those that have already done so are Motorhead, Kiss, AC/DC. Kid Rock, Iron Maiden, Queen, Sir Paul McCartney, Elbw and Madness.

According to band and brewery, the beer is a ‘refreshing golden premium ale, with hints of citrus fruit and lychee, all balanced by a subtle bitterness’.

Brewed using American Cascade, Centennial and Willamette hops, with English Maris Otter malt, it is intended to ‘appeal to both craft and traditional ale categories, and the growing female market’.

New Order said in a statement: “It’s been a pleasure to work on our first foray into the brewing business with Moorhouse’s of Burnley with such a rich heritage in the north west and coming hard on the heels of their milestone 150th year.”

Commenting on the collaboration, Moorhouse’s sales director Mark Boardman said: “Stray Dog is a terrific addition to Moorhouse’s award winning portfolio and a significant brand milestone to follow up our successful 150th anniversary last year. We expect it to play well in cask with our own loyal followers, New Order fans, and in today’s fast moving craft ale marketplace, which increasingly appeals to a younger audience.”

Stray Dog will be available exclusively in Mitchells & Butlers pubs, including Nicholson’s, from August Bank Holiday weekend, ahead of nationwide release from mid-September. The beer will officially be launched at a special event at Mitchell’s & Butler’s The Sawyer’s Arms Nicholson’s site in Manchester on Sunday, August 28.