"The brand's an incredible business driver": Inside the thrilling revival of MTV Unplugged in the UK 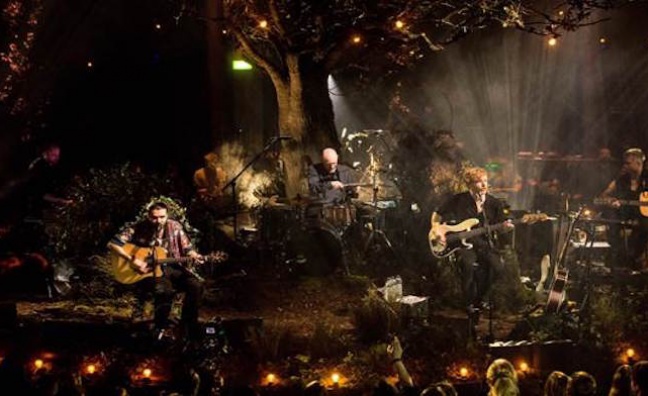 In the new issue of Music Week, we speak to Biffy Clyro frontman Simon Neil about how the Scottish alt-rock trio have helped resurrect MTV’s legendary Unplugged brand on our shores.

While there once was a time when MTV Unplugged was an anticipated milestone for any artist’s career (ranging from Nirvana and Pearl Jam to Jay-Z and Lauryn Hill), bookings across the pond have gone from numerable to sporadic, with a brief spurt in 2009 including Adele  and Katy Perry, but only yielding two actual CD releases.

Yet that is nothing compared to its diminished frequency on our shores, which hasn’t seen an original format iteration of Unplugged since The Corrs in 1999. In November 2017, that changed when Biffy Clyro stepped up to the plate armed with acoustic instruments and stripped their songs back to their bare bones.

With Biffy Clyro’s Unplugged set due for physical release this week on May 25 – and the performance set to premiere on MTV on the same day at 9pm in the UK, and also across the world – and the band set to take their Unplugged incarnation on the road in September, it marks an exciting new chapter for this heritage brand. In this exclusive chat with Music Week, Albert Schilcher, VP, talent and music, MTV International explains why this is just the start…

How did Biffy Clyro and MTV join forces?
Albert Schilcher: “Well, we’ve been fans, friends and partners with the band for many years. We worked on several events together, including the EMAs in Glasgow. There’s a good relationship, and we’ve been friends and partners with Paul Craig their manager [Nostromo Management], and everyone at Warners and we had decided to bring this property back in the UK."

Who broached it first?
“I did. I went to Paul, he immediately responded to it because the band have a real affinity with Unplugged. It was a big deal for them, and from our point of view, I’d seen them do acoustic tracks before and was always amazed how strong the songs are and how well they work. It just matched up really well. In America, we’d done a few [Unpluggeds] over the last few years, but let’s say they weren’t done with the same intentions that we used to do Eric Clapton, Nirvana and Jay-Z – it was more just a TV piece under the brand. In other parts of the world, however, the brand has been an incredible business driver, especially in Germany. They put out several records, one with a big local artist called Udo Lindenberg who’s one of their old heroes from the '70s – they resurrected his career by doing collaborations in the show with new acts. He went on to sell almost a million copies and went on to tour.”

So what can Unplugged do for acts today specifcially?
“I think it’s a really nice product to put out there. It works in so many ways, it works nice on television, nice on socials, works great for streaming. If you get the timing right it’s the perfect thing to do, particularly as acts are maybe a few albums in. Not only that, but if you’re a few albums in and have a nice stack of hits, you’ve maybe put out a greatest hits so there’s no need in doing that again, and you’ve put out your own live albums. Also, you might want to show yourself in a different light. If you’re a massive rock band that do big produced shows, this is a way to take it right down to the bare bones, to the essence of what you do. Or it could work really well for an urban act, like it did for Jay-Z. I’d love to try and do that. Also, what we haven’t done yet is a dance act. It’s a great way to show yourself in a different light and show the quality of your songs, your musicianship. Nowadays, it’s a strong brand, it will cut through. It’s got that legacy. For the consumer it’s a great proposition, and I think for the artists they like it for their catalogue, their legacy.”

Unplugged is a great way to show yourself in a different light and show the quality of your songs, your musicianship

how many other Unplugged are there currently in the pipeline?
“In the UK we’re definitely going to do two more, ideally in 2018 but definitely in the next 12 months. We’re currently talking to people right now, there’s a few conversations.”

MTV Unplugged is an old institution, how have you updated your approach to it?
“Some things are the same – you play the performances of the videos, you air the show on the release date and do promo spots, tune-in spots and a marketing campaign on the channels. That’s all the same. What’s new is the tour which is fantastic and has been done a lot in other markets successful.”

What role do MTV have in that?
“We’re marketing partners. We will promote the dates, run competitions and do news coverage from different countries that it reaches. Anything we do these days is different, you have to hit all the platforms – we have a very good social profile so we’ll use Snapchat, Facebook, Twitter and a strategic roll-out on how we interact and interface with the labels and artist platforms. The band will go into the market in Germany, they’ve got a promo run planned and a few things planned in the UK.”

Subscribers can read the full Biffy Clyro/MTV Unplugged feature here. You can watch the video for Biffy Clyro’s Unplugged performance of Black Chandalier below: