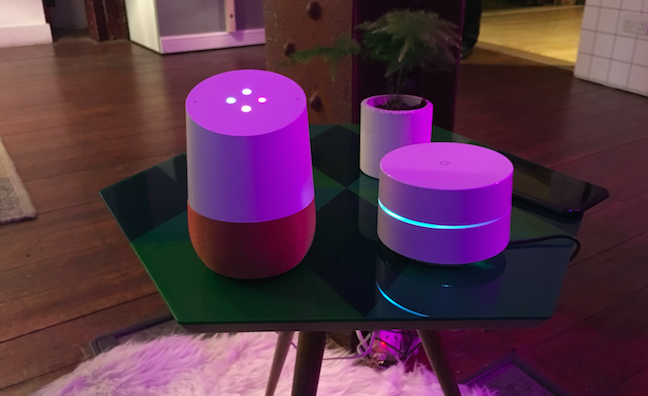 Music Week has been given a sneak preview of Google’s new smart speaker Google Home, as the tech giant looks to go head to head with Amazon’s Echo in the domestic device market.

A select audience was invited to a special preview event in London’s East End tonight (Wednesday, March 29) for a look at the new product ahead of its public launch in the UK next week.

The voice activated Google Home smart speaker, which hits UK shelves next Thursday (April 6), allows both Google Play and Spotify subscribers to listen to music via the device. It also shares many of the same features as the Amazon Echo, enabling users to ask it – or Google - all manner of general questions and control other linked smart devices, such as light bulbs. It can also be synced with services such as YouTube and Netflix.

Google Play Music subscribers who purchase Google Home, priced at £120, will be given three months’ premium service for free, as it bids to attract more customers to its music streaming service.

Unlike Amazon Echo’s Alexa, Google Home’s voice recognition system doesn’t have name. Users need simply say the words Hey Google to get its attention. Furthermore, the speaker is available in a wide variety of colour finishes with an array of different coloured covers also available for those who wish to customise its appearance.