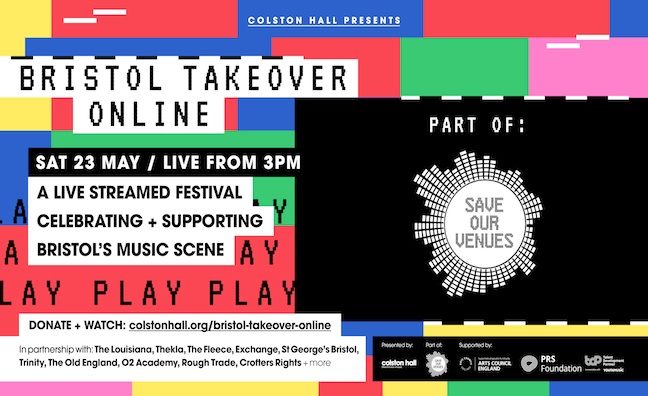 The Internet has witnessed a huge surge in livestreaming over the past month as artists and media outlets conjure up new ways to entertain fans without leaving their front door.

A range of artists from Bristol’s music scene have joined together to create an online festival in an effort to help save its live music venues, for Colston Hall Presents: Bristol Takeover Onine.

In partnership with BBC Introducing in the West and Music Venue Trust’s Save Our Venues, the festival will take place May 23 from 3pm-midnight for free on YouTube.

Fans will be encouraged to donate the price of a gig ticket to the event's CrowdFunder page here and will be able to watch over nine hours of live music.

All funds raised will be split equally between artists and music venues to ensure that Bristol’s live scene remains intact.

Set to perform are The Allergies, Kate Stapley, Memotone, Whale, Tropical Tea Party and many more.

The event will also broadcast archive sets from the likes of Wolf Alice, Slaves, Fat White Family, Kagoule and PINS.

“The Bristol Takeover is our annual event to spotlight the incredible music scene we’re fortunate enough to be a part of here in Bristol, and with the Coronavirus outbreak we wanted to move it online to keep celebrating and supporting live music in our city,” explained Colston Hall artistic director, Todd Wills.

“It’s an uncertain time for both venues and artists, so working together and with Music Venue Trust on their Save Our Venues campaign, we hope to raise the funds that will ensure we still have a vibrant live music scene to return to.”

Check out everything you need to know about the festival here.

Dropkick Murphys are set to honour their history of performing at Fenway Park with Streaming Outta Fenway – a livestream show on May 29 where the band will play on the baseball diamond in support of Boston Resliliency Fund, Feeding America and Habitat for Humanity via a text to donate system.

Fans can tune into the performance at 6pm ET and 3pm PT which will be simulcast across the band’s social media and will feature a two song ‘double play’ with Bruce Springsteen.

Streaming live at London’s Union Chapel, Laura Marling will be performing for fans in a ticketed event June 6, following the release of her new album Song For Our Daughter.

Minimal staff and crew will take part in order to help produce the show, and tickets are available to purchase through DICE here with a link to the performance made available when the show begins.

When purchasing tickets, fans will be offered the choice of two charities to donate to on top of their purchase, with Marling herself choosing Refuge and The Trussel Trust as the two to benefit.

BBC Radio 1's Big Weekend was set to take place May 22-24 in Dundee with Dua Lipa and Harry Styles among the headliners announced, however a move for the festival to go digital has been announced.

Sets live from the artists' homes will take place in addition to archive sets across five digital stages, with Sam Smith, Rita Ora, Anne-Marie and Biffy Clyro among a huge line-up of over 100 artists.

Manchester venue Jimmy’s has announced the latest artist to join its isolation gig series, as Stockport band Kashmere are set to stream live May 24 at 9pm.

Tonight will see Manchester four-piece The Covasettes take over the series, playing a half hour set live from their home.

Artists who have already featured on their series include Matt Thomson of The Amazons, Jerry Williams, Zuzu, Barns Courtney, Benjamin Francis Leftwich, Spector and Hannah Jane Lewis among others.

Tonight (May 21), Frank Turner will be hosting a livestream in support of Xtra Mile Recordings. The musician will be playing his seventh studio album Be More Kind in full to enourage fans to purchase merchandise and records from the label.

Turner has been signed to Xtra Mile Recordings for over a decade and hopes this will not only help him but the other artists in its roster too.

The livestream is the latest in a series Turner pegged #IndependentVenueLove, but for one night only it will be focused on Independent Label Love before returing its support to venues in the coming weeks.

To tune in head over to Turner's YouTube channel at 8:30pm UK time tonight.

Watch the previous livestream below.

Scouting for Girls for #RoyalAbertHome

Tim Burgess has now been announced as the last performer of the series at current, who will be performing an intimate set for fans June 4.

From Sleadford Mods’ English Tapas to Blossoms’ Foolish Loving Spaces and Foals’ Holy Fire, Burgess has hand-picked a variety of albums which he will tweet along his reactions and encourages others to join in.

The party will be running from now until May 30 with a selection of different albums every day.

The live performances are available on the band’s YouTube channel at 10pm BST each week and has already seen an hour long set from A Tent In Dublin (2000) and two hour long sets from Berlin (2016) and Buenos Aires (2009) among others.

Tonight (May 21) will see the band re-air their film The King Of Limbs From The Basement filmed at Maida Vale Studios in London from December 2011. Tune in below...