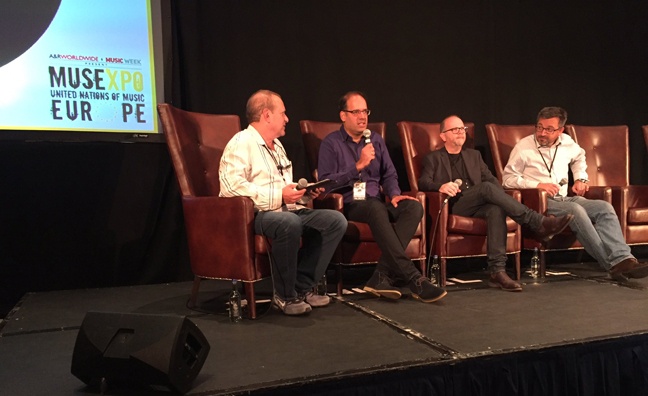 Day 2 of MUSEXPO Europe with the European Radio Summit, a spirited debate on radio's evolution in the modern age.

Panellists Jeff Smith, head of music for BBC Radio 2 and 6 Music, and Edward Kershaw, chief commercial officer of digital music firm 7digital, offered opposing views on the role of data in radio curation in the session, moderated by Joe Denver, publisher and president of US-based AllAccess.

"We don't really use [data]," admitted Smith. "There's so much of it that you can just blind yourself with science, so we don't. We just use our ears to judge the music, which I think is the important factor. But I think it would be irresponsible if we didn't listen to the audience, so it's important for us to do some music taste research."

Kershaw countered: "I'm going to stand up for metrics a little bit. There are ways of using usage and taste metrics that really can inform the way that content is put together for clients.

"We're working on a service that's just about to launch in France, which uses a wide variety of different metrics, pulled from different sources. This is for an online service and it's looking at what's being played on French radio, it's looking at what's been talked about in French social media, it's looking at what's being streamed in French online streaming programmes to try and pick up trends before they happen. Rather than saying, what's the biggest thing on Spotify let's put that on No.1, it's doing almost the opposite. So I think metrics play a part. I think there is a place for using them to inform the way that we can put together even human-curated music programming."

Smith said digital music services such as Spotify and Apple Music were "great utilities for people", but cautioned: "It's going to be quite a big challenge for them to come into our radio area... because I think the humanity thing is a real key factor. "I think the idea where people can stumble upon music is still a really important thing - and you cannot stumble upon music on a music service, whatever they say.

"That said, we've got to be really aware that they are out there competing for that share of ear. So what we've got to do is go into area a little bit. We've had a lot of success building playlists and building mood and genre-oriented things, but I think in the end it is going to be about creating properties and building on trusted brands like Radio 2 and 6 Music which get people noticed."

Fellow panellist Aditya Sharma, head of music for Germany's Radio Fritz said the "democratisation of music" had led to too much music becoming available.

"As human beings, we just can’t manage the volume of music that we are being hit with right now," he said. "So obviously you do have to go into all of the sources you can get, to try and extract what is of relevance to begin with, to even contemplate what might be interesting for radio."

Turning his attention to live music broadcasts, he added: "We're living in times where the record industry obviously doesn't have the influence it used to but the live music industry has become so important that we would like to latch ourselves onto that as well. I remember 20 years ago when I started, record labels were not very keen to have us broadcast live gigs that were not sold out because they said that your offer on radio is going to keep people from going to the shows. It turns out it's exactly the opposite now. The live experience is something we should be capturing on radio more."