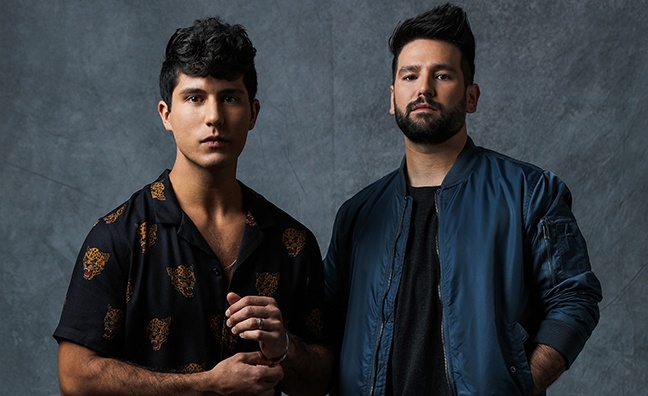 C2C might have fallen victim to the growing coronavirus pandemic, with country’s biggest international showcase the most high-profile postponement yet amidst what’s rapidly turning into a full-blown crisis for the live industry.

But not even Covid-19 can stop people streaming music – and that’s exactly what country fans have been doing in increasing numbers in recent times.

But how is country’s shift to streaming working out for the record labels? One man who knows is Ben Kline, EVP/GM of Warner Music Nashville, home to country streaming sensations Dan + Shay (pictured). So Music Week sat down with Kline to find out what’s behind the boom. It’ll make for fascinating reading while you’re waiting for C2C to be rescheduled…

Why did country take so long to take off on streaming?
“Historically, technological changes in formats have been driven by youth and the early adopters. And our genre, whether it was the transition from LP to CD, from CD to digital or digital to streaming, we’ve always lagged a little bit, because we are mainstream. That said, it has taken less time for us to catch up than perhaps it has in the past from a format standpoint. Internationally, part of that is we appeal to youth, to multiple demographics overseas who are more apt to stream, so we’re seeing increased speed with adoption. C2C is a great example; my favourite part is seeing the groups of 18-24-year-olds that come to this event and soak up every minute of the music. Those are the folks on Spotify and Apple Music and Amazon. The borders have come down, it’s easier to access, all of those factors play into its continued rise. The other side of that coin is I would certainly give credit to Bob Harris and a number of folks internationally that have exposed the general population to our music. Radio 2 is incredibly supportive. In the UK specifically, singer-songwriters and storytellers have always been well-received and that is at the core of what country is.”

Which artists tend to go down best on streaming?
“The best part of this is, it’s not just pop-leaning. Dan + Shay’s Tequila was a global hit and the song with Justin Bieber opened up even more doors in territories such as Asia and central and eastern Europe. But the other exciting thing is an artist like Ashley McBryde is massive in the UK, she’s selling tickets at a faster pace than some superstars would. She’s been embraced because she’s a genuine, authentic artist that is a gifted storyteller. It’s nice that it’s not just one-size-fits-all, we have different artists in different territories over-indexing with streaming partners.”

Which markets are opening up for country off the back of streaming?
“It’s always been US, Canada and Australia for country music fanbases. Now we have the UK, Germany is growing hugely for us. Dan + Shay’s last song did 100 million streams in China – that is an unheard of number. Pop superstars would love to do that! It’s one brick at a time but C2C is a great example of seeing it pay off; a packed arena every night just singing word for word with all the artists on stage. We weren’t sure what to expect from C2C Berlin, but it was a massive success. So there is hunger and our partners in the streaming space have been very receptive. The CMA has been very vocal and created taskforces in territories that have label people and streaming partners.”

Liz Rose says the shift to streaming is hitting songwriters. But is there any downside for labels?
“No, I don’t see any downside. To me it is incremental – we are getting our music heard and appreciated in places that old models would never have afforded us. I believe a high tide will lift all boats and the more our music is heard around the globe, the more fans we create and the bigger it becomes.”

So can country now become a truly global genre?
“You’d be naïve to make that claim, but we are part of the conversation and we are part of the mainstream in far more countries and territories than we ever have been before. We will all be happy when country is everywhere. It’s building one brick at a time but we still have a lot of work to do – and we’re all committed to it.”

* To read Music Week’s full investigation into country’s streaming boom, click here. To make sure you can access Music Week wherever you are, subscribe to our digital issue by clicking here.