Birdy reveals how she flew from sync queen to sales queen 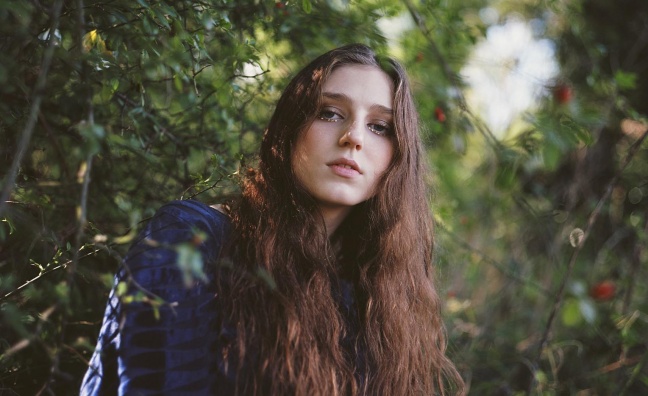 It’s unlikely that you’ll have avoided hearing a Birdy song since the singer – whose real name is Jasmine van den Bogaerde – began her career with the well-known cover of Bon Iver’s Skinny Love in 2011. The single was used in TV series The Vampire Diaries and Prisoners’ Wives, kick-starting a career that’s seen high-profile sync deals get the music out to the public while its creator is able to shy away from the limelight.

“I’ve had everything happen very gradually,” the singer tells Music Week. “I’ve gotten used to doing interviews and travelling; I had my parents with me ‘til I was 18. That was me getting used to it.

“Now, I feel quite lucky to be so ahead, so young, and to understand the industry already, much more than I would’ve if I started now. I can be more of a grown-up and take more control of my music. It’s a good feeling.”
The single debuted within the Top 40 at No.25, going on to peak at No.17. At the time of writing, it has to date sold 744,502 copies, according to Official Charts Company data.

Paul Samuels, A&R at Atlantic Records, says: “When she made the first two records, she was so young - the first one being when she was, like, 14 years old and filled with very cool covers. The record exploded and it was a really amazing choice of songs, which she had massive involvement in picking, and how to deliver them.”

In contrast, the second album according to Samuels, was made quickly, leaving Birdy with a sense of detachment during the process.

“When it came to making a new record with her, our chairman Max Lousada came to me and said, I know you’re a massive fan,” continues Samuels. “I like to think I’m known as an A&R who can really get under the skin of an artist, to find out what’s there and empower them to make a record that they own, that they feel attached to.

“I don’t think she loves her second record, but she loves Beautiful Lies; she had a lot of control. There are five or six songs on there that are completely 100% Birdy songs.

“Everything about the production, she’s been involved with. Even Steve Mac has given her a co-production credit on Keeping Your Head Up; one of the world’s biggest record producers was like, This girl is incredible and has real understanding of the studio. It’s quite mad really when you think about it.”

Samuels is very open about the fact that Beautiful Lies has been considered as “the first Birdy album”, compared to the debut, which was a collection of coverts, and the second one being “a little
over-blown and pompous”. He adds: “It sets us up for a very long career for Birdy - that was the whole point of this record.

“It wasn’t, Let’s smash a couple of big singles on there and do a bank raid to get a result. She’s a career artist; most people don’t even put a record out until they’re her age anyway.

“This is a girl who’s released three albums, sold millions of records, will sell out Hammersmith, and tour the world successfully. It was, If we get her third album right, we will have a very long career with Birdy.”

In terms of sync deals, van den Bogaerde – who won the Sync Artist Of The Year award at Music Week’s 2015 Sync Awards – has most enjoyed having tracks on shows that she herself watches. “Having something in The Vampire Diaries, something I really like, that’s always really exciting,” she gushes.

“It would have to be something really bad for me to not want to do it, and I’d feel very awkward about it. So far, it’s been Broadchurch and BBC stuff in the UK, and I love all of that.”

The singer – now 20 years old – has become known for being shy, and has had to learn to deal with the more public-facing aspects of her career, such as TV appearances. But that hasn’t held her back – sync deals have kept her music in the charts, including on an international scale. “[Sync] has been a big part of all of that, definitely with [single] Wings,” she says.

“It’s weird; every time somebody sings it on a talent show, like Britain’s Got Talent, the album’s back in the chart, and that song is up in the chart. It’s amazing how powerful it can be when someone hears it. And there are American series - Vampire Diaries, Gilmore Girls - where it’s played, and then people are aware in America as well.”

Equally, the artist’s persona does dovetail nicely with her music, as van den Bogaerde adds: “The fact that I’m quite shy and private kind of adds to it; my music is quite mysterious, and I like that about it, you don’t see everything and it’s just through my voice and the words, people interpreting what they want from it.

“But I’ve had to learn a lot of things, like doing interviews and TV. That’s been quite a struggle for me - to become someone that does that all the time. It’s a different world to what I was used to.”

Although she’s in the age range that would be considered ‘millennial’, van den Bogaerde is not a fan of social media. “I’m really not very good at it, which is hard because I want to be, I want to be interactive,” she says. “I find it quite a weird world. I guess I’m quite private as well, and it’s constantly saying what you’re doing, where you are, who you’re with. I love the support I get on it, and I want to thank people for it.”

So the music, at least until recently, has had to speak for itself. And spoken it has – three of the most synced Birdy tracks are also her highest charting singles. Wings, which you’ve probably heard on a Lloyds advert, peaked at No.8 in 2015, two years after release, to become her first Top 10 hit.

Before that, 2011 single People Help The People (a Cherry Ghost cover) became her second Top 40 hit after Skinny Love, debuting at No.33; it returned to the Top 40 in 2013, at No.36, following its use in a Broadchurch trailer.

The singer’s most recent album, Beautiful Lies, was released in April this year and debuted in the Official Albums Chart at Birdy’s highest chart position yet, No.4, with lifetime sales standing at 48,883 following a first week total of 10,963.

Samuels says: “Max [Lousada] has always seen her as this hugely exciting artist with massive potential. Anyone who can sit there and re-interpret People Help The People and make it their own... There’s a skillset in taking a song and making it your own. I was always a massive fan of Simon Aldridge and Cherry Ghost, and when I heard her re-working that record, it was amazing.”

He adds: “The thing with Wings is that it’s a beautiful version of the song; it’s something that she’s proud of. The original production of the song really didn’t do it justice, and that’s why she was never that excited about the version that ended up on the album.

“She re-interpreted that song herself, I can’t claim I went in the studio with her and did it. In the world that we live in, sync is a big part of most artists’ worlds. We’re not apologetic for sync.”

Chris Ruff, production manager on the Birdy campaign, also says: “We don’t shy away from it. It’s helped in terms of the UK and getting her out to millions of people every day. That’s only a good thing, really.

“It’s connecting the dots; we had the Lloyds ad, and then Keeping Your Head Up came out around the same time, and it was all perfect because we were building into album launch.”

Music Week’s Sync Awards return for 2016 on Thursday, October 20 at London’s Bloomsbury Ballroom. Celebrating the best sync individuals, teams and placements across a broad range of media over the past 12 months, nominations for awards are open until August 19, and tickets are available now at www.syncawards.com.