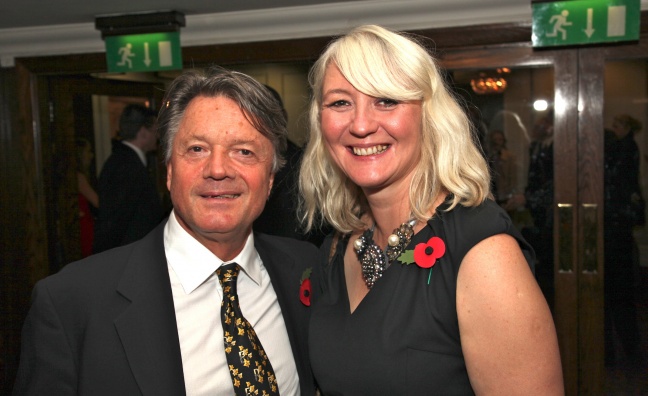 If you had an event to organise in the British music industry, there was only person you really needed to call.
Fiona Haycock, who passed away on August 31, aged just 51, after a battle with cancer, helped produce events including the Music Industry Trusts Award (MITs), the Silver Clefs, the Sony Radio Awards and the MOBOs.

And, while she was never one to seek the limelight herself, the success of those events owes an awful lot to her calm organisational skills.

“Every year, I’ve taken all the credit and she did all the work,” smiles David Munns, MITs Award committee chairman and former senior EMI executive. “She was one of those people who was so organised and efficient and never really missed anything.

She was calm, she never got flustered and never screwed up, she made it all work. People liked her so much they’d do anything for her. I don’t think she ever fell out with anybody.”

Haycock’s trademark cheerful composure stood out in a high-pressured world where the biggest events often come with egos to match, but Munns says she “took it all in her stride”.

“She did it with so much style and grace,” he says. “She made it all look easy, but it wasn’t, of course. There were scrapes going on all the time that she manoeuvred around. She could deliver quite a firm message without ruffling any feathers.

It’s quite an art, in this business, to say ‘no’ to people nicely and keep a smile on their face. She had the knack of doing it.”

Haycock joined the music business in the mid-‘90s, having previously worked at theatre and ballet companies, first serving as the BPI’s director of PR and events for several years. The BPI’s current director of events and charities, Maggie Crowe, remembers her as “a beautiful girl inside and out”.

“Fi stood like a ballerina, tall and statuesque, towering over the many shorties, me included, in the industry,” Crowe remembers. “She joined BPI when John Deacon was its director general.

The industry at that time had just got through the 1988 Copyright Act [which reformulated UK copyright laws], with campaigns such as ‘home taping is killing music’. In her department, Fiona managed all the new initiatives that came with that era, and there were plenty of them.”

Crowe credits Haycock with beefing up the British presence at MIDEM to its current high levels of participation by teaming up with other industry trade bodies.

She also worked closely with the then Department For Trade And Industry to develop the trade missions that have proved such a bonus to BPI members in recent years.

“She loved working with Lisa Anderson who was the producer of the BRIT Awards during the ‘90s,” adds Crowe. “With Rob Dickins as chair, she and Lisa masterminded the first ever Classical BRIT Awards in 2000.

She loved her music, her friends and, of course, her horse. Her good nature - no matter how much pressure was piled on - shone through.

“Whether it was tears of laughter or hysteria, as a team we’d always end the event evening in the same way – with a few drinks and lots of giggles at the ridiculousness of it all.”

Haycock left the BPI in 1999 and ran her own events and communications company for a decade, before joining PPL as head of events in 2009.

Former PPL chairman/CEO Fran Nevrkla remembers her as “one of the nicest individuals in the business, immensely talented and hard working”.

“She made a huge contribution to the industry and many key events would not have taken place without her,” he adds. “She was a lovely colleague and a loyal friend. She will be greatly missed.”

Current PPL CEO Peter Leathem echoes those sentiments. “Fiona spent five years at PPL and was much-loved by everyone in the company,” he says. “Just as she was much-loved around the industry.

She organised countless company events, from the AGM, to the Parliamentary Jazz Awards, the PPL Christmas drinks and many more. Big or small, she was always meticulous in her planning, creative in her thinking and each one was carried through with a style and professionalism that was her trademark.She will be much missed by many people.”

But while Haycock always brought her top-level professionalism to any event she worked on, it was her role as executive producer of the MITs that was perhaps closest to her heart.

She spent over 20 years working on the do, helping to honour the likes of Simon Cowell, Michael Eavis, Lucian Grainge, Harvey Goldsmith and Kylie Minogue and to raise millions of pounds for two of the music business’ favourite charities, Nordoff Robbins (where she was also an events and fundraising manager) and the BRIT Trust.

The MITs sits proudly as one of the industry’s most unmissable annual events, thanks in no small part to her work.

“This was her pet project,” says Munns. ”I’ve got to be honest, I can’t see how it would have happened without her. The MITs has raised nearly £6 million for charity and she can take a great deal of credit for it. It’s quite a legacy.

You know how difficult it is to raise money, so to do it every year for 20 years is quite something.”
Nordoff Robbins director of fundraising and communications, Jo Carter, praises Haycock’s work for allowing the charity “to change countless lives through music therapy” and Claire Singers of LD Communications, which handles PR for the MITs, remembers her as “the consummate professional”.

“I had the great pleasure of working with Fiona and enjoying her friendship for over 20 years,” says Singers. “First on the BRIT Awards when she was at the BPI, then on the Sony Radio Academy Awards and, for the last 18 years, on the MITS.

“Put simply, Fiona was a beautiful person, through and through, she was kind, generous, and caring, and a grown-up. In all those years, I never saw her lose her temper, and there were plenty of times when her patience was tested to the limits.

“She was an unsung industry veteran, unfailingly modest and the consummate professional, but I think it was her work for the MITs that was the most special to her. It will be her legacy.”

“She was never unprepared, never angry, never lost for a solution,” he says. “Fiona was always aware of why the Music Industry Trusts award exists, and how the money raised changes lives for the better. There aren’t enough people like her in the music business, or life, for that matter.”

“She was a listener,” adds Crowe. “A true friend to those she loved but also a consummate professional. Her delivery of every single Music Industry Trusts Award since 1992 is true testament to that professionalism.”

As Music Week went to press, plans for a memorial service to Haycock were being made, with details to be published soon.

Meanwhile, this year’s MITs, which Haycock worked on until shortly before her death, will honour The Who’s Roger Daltrey. The evening is often an emotional occasion and this year, without Haycock at the helm, Munns expects it to be even more so.

“We’ll miss her,” he declares. “We’ll have to make a fuss of her on the night. She should be remembered as the backbone behind the MITs and one of the greatest event organisers we’ve ever known.”

?Donations in Fiona Haycock’s memory can be made to: St Joseph’s Hospice, Mare St, London,
E8 4SA or https://www.stjh.org.uk/donate