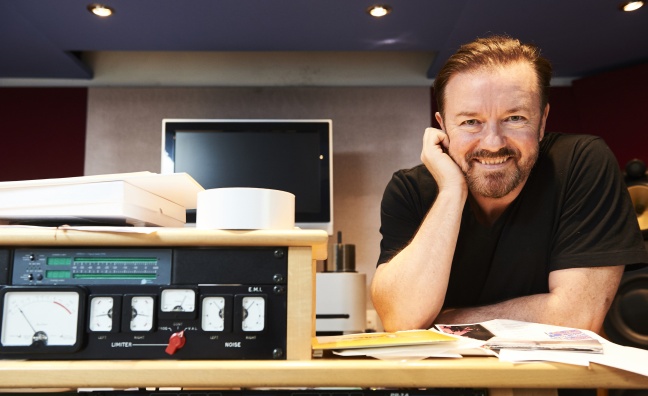 "I didn’t get into music,” says Ricky Gervais, speaking to Music Week ahead of the release of Life On The Road – the debut album from David Brent & Foregone Conclusion. “I got through the door and then was asked to leave almost immediately!”

Long before he created and starred as Brent in The Office, Gervais had a brief stint as an up-and-coming pop star with new wave duo Seona Dancing, which he joined in the ‘80s while at UCL.
The group signed to London Records but failed to break the Top 40 in the UK. One of their singles did become a hit in the Philippines though.

“I went to college and I was into music from an early age, like everyone, and I joined a band and we made a demo and we got signed - it was all too easy,” he says.

“But, because I’m famous now, the Chinese whispers are that I was a pop star and I was on Top Of The Pops and that I was big in the Philippines. That last one might be true, but I have no evidence about that. It could be an urban myth.”

In addition to the rumours and Wikipedia entries, all that remains of that period in his life, according to Gervais is “one video, half a dozen photographs that they show on Jimmy Fallon, Letterman or Jonathan Ross”.

“Everyone thinks I was a pop star, but I wasn’t - I was just nearly a pop star for six months!”

In spite of almost making it in music when he was younger, Gervais tells Music Week that one of “his biggest mistakes” was wanting to become a pop star. “I should have wanted to be a musician,” he says. “To make music is the greatest, most evocative art form. It’s like downloading emotions, it’s magical, and I’m in awe of it.”

In addition to his brief attempt at pop-stardom, Gervais “sort of” of managed Suede at the very beginning of their career. “That sentence alone makes me sound much better than I am,” he jokes.

“I helped them out in the early days, when I was the entertainment manager at university. And I knew Simon Gilbert who worked in the ticket shop, but I did very little for them.

“I did send their tape to Saul [Galpern] at Nude Records, because I was dealing with record labels and stuff.

So I did that and then I couldn’t do it anymore, and when I said, Good luck, they definitely didn’t seem depressed. And then, they took off, when they got a real manager.”

On August 19, Gervais releases the debut Brent album in conjunction with David Brent: Life On The Road – a new mock documentary which follows Brent 12 years after The Office as he pursues his dream of being a rock star with his band Foregone Conclusion. Gervais has also created the David Brent Songbook, which will be released on August 11.

“What you see in the film is that he does terrible gigs, and not very many people come,” says Gervais. “Some people vaguely remember him from the documentary and he has to pay for the house and he pays for session musicians and he says awful things on stage.

"He doesn’t get anywhere. Whereas when I do it live in the real world, the crowd go mad and they love it because they are in on the joke. So I want to laugh, but I have to be Brent - it’s a strange fourth wall we are playing with.”

People in the real world love David Brent & Foregone Conclusion so much, in fact, that the spoof band’s September 8-9 dates at London’s Eventim Apollo were the 5,000-capacity venue’s fastest selling gigs this year, reportedly selling out in 15 minutes.

The 15-track album will be released via Caroline International and was produced by Gervais and former Razorlight member Andy Burrows.

“Andy is such a joy to work with,” says Gervais. “I am blown away by his skills and his versatility. He’s a little genius. He plays piano, guitar and he’s the most amazing drummer I have ever worked with - and he is so modest and affable and positive.

"We are so excited, it’s like an ‘80s movie where two kids suddenly get any wish, and they just run around playing for a day.”

Gervais says that he sometimes jokes about living out his past’s pop-star dreams through David Brent, but insists that he doesn’t want the album to be seen as a Ricky Gervais “vanity project” and that it is being released “purely to enhance the realism of a fictional character in the real world”.

“It’s a fake documentary - it’s still all about the film and the concept that lives within The Office and now in Life On The Road. And this is just what he [Brent] did, seeping into the real world,” he says.

“I am not having an identity crisis; I don’t think I’m a pop star. If you could see me now, you’d believe me. I am sitting in my old pyjamas in a free T-shirt from Jimmy Fallon, in a cashmere jumper and old slippers on a couch in my study. I am not a rock star.”

Although the album is supposed to have been made by a fictional character and Gervais has conceded that he won’t ever be a pop star, he emphasises how much he’s enjoyed the process of creating music for an official release and adds that he’s is looking forward to playing the vinyl on his turntable at home.

“I am still creating something, but I am creating it as David Brent. I know it sounds like I am paranoid and like I’ve got a chip on my shoulder, but I really want people to know that this is an album I have created as David Brent, and that it is part of that fiction.

"I know I am still a middle-aged comedian whose fictional character is bringing out an album.”

Caroline co-MD Michael Roe says: “He is extraordinarily excited about the record - this is not just a vehicle to drive a film, he is very committed to selling and releasing a David Brent record. And all the initiatives that we have discussed in order to set it up, he’s been instrumental in helping to deliver. The record as a standalone album is very, very important to him.”

Explaining his decision to work with Caroline International on the release, Gervais says that he “wanted to be the record company” and that he didn’t need a real record deal.

“I’m not a 16-year-old boy band. I know the score - it’s a tie in with the film, and I wanted a good distributor really,” he says. “So I’m the record company, effectively. It was just about the perfect pairing and they have been fantastic. They are across all genres, and I am learning a lot from them. I ask them questions every day about something.

“I don’t really know this business. Some things haven’t changed in 30 years but most things have. This is a
one-off album that will always be around. I want it to be a one-off, but I want it to be timeless as well, but it is a lovely piece of merchandise that will go along forever. It wasn’t really about me signing to someone like Simon Cowell - it was about the best pairing for what I can bring to it already and what I don’t know.”

Additionally, Gervais says that, as he’s not a “real band” that needs to be broken, he didn’t need the type of press that a typical album campaign would require, citing his social media reach as enough to promote the album.

“You need marketing when you are not known - I just needed it to get in shops,” he says. “I have got 11 million followers on Twitter - every music magazine in the world doesn’t have that reach.

"People get the gag. I just wanted people to make it real, make it efficient, and get it everywhere: and then I can do the rest!

”I just wanted the best people to distribute that worldwide and the best relationship with people like iTunes and Vevo and Spotify, and globally. It can be global, because of my presence globally as myself and as David Brent in 100 countries.

“I have always done that. I’ve always created my own labour and captained my own ship, even with collaborations that facilitate what I need. I am a bit of a creative control freak, but with business I do take advice. I know the score - I know what’s possible and what’s realistic.”

Caroline co-MD Jim Chancellor tells Music Week that the conversation with Gervais’ management about working together started when he began to post guitar lessons on YouTube as David Brent.

“It piqued our interest,” explains Chancellor. “We thought the songs were funny and good. So we chased down management, and he actually ended up doing a couple of gigs, which we went to. We talked quite a lot about doing it, but then various commitments came up, he went away and then it has just resurfaced again with the film and everything coming into the world.

“We have been pursuing it for a long time, and he finally decided that label services would be an approach that he wanted to go down.”

Although Caroline’s MDs tell Music Week in jest that they’re hoping for a No.1, when asked whether he hopes the album is going to be successful, Gervais says it’s not someting he’s worrying about. “I don’t fear that with this,” he says.

“Because it didn’t cost a lot. I haven’t got millions of pounds to pay back. I can only let myself down. I don’t really care about reviews because if someone slags it off they’ve missed the joke. How can they slag off a fictional character? It’s win-win. It’s pain free. It’s bulletproof - commercially and critically.”