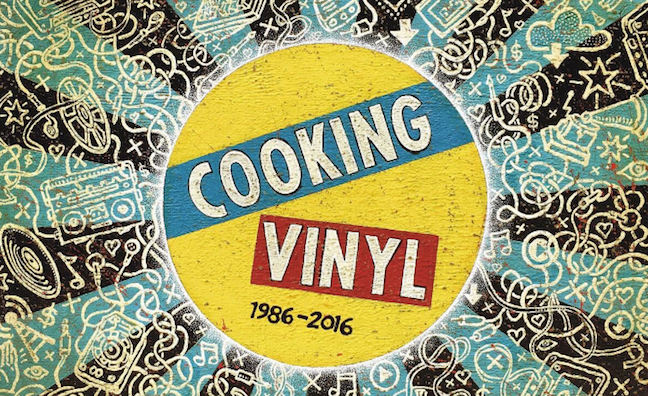 The gigs will take place at The Lexington in London over three nights from December 5-7. Turin Brakes, Alison Moyet and Teddy Thompson will appear on the first night, followed by Lewis Watson Jon McClure (Reverend & The Makers) and The Subways’ Billy Lunn on the second. Joining Billy Bragg on the bill for the final night are Itch (The King Blues) and John Wheeler (Hayseed Dixie).

All are Cooking Vinyl artists past and present and there will be special guests at each event. Tickets cost £20 and are available now.

The label, based in Acton and founded in 1986 by Martin Goldschmidt and Pete Lawrence, will also release a limited edition 70-track vinyl and CD box set on November 25. The box set features an array of acts including Gary Numan, The Prodigy, The Wedding Present and The Orb. Artwork for the release (seen above) is a specially commissioned painting by Jon Langford, formerly of The Mekons, who were signed to the label in the late 1980s.

Cooking Vinyl are also launching a £30,000 fund via PledgeMusic, with the aim of giving something back to artists, entrepreneurs and visionaries in the music industry. Under this bi-annual initiative the label are investing an initial £30,000 to help acts with various aspects of their development, entrepreneurs seeking capital for new ideas and those who want to use music to make the world a better place.

All profits from the commercial activities surrounding Cooking Vinyl’s 30th Anniversary will go to charity. The label recently asked its staff to suggest suitable causes and to vote on a shortlist with three organisations chosen to be equal recipients – Hope Not Hate, Nordoff Robbins and Palestine Music Expo.

Meanwhile, a book titled It’s A Business Doing Pleasure With You – 30 Lessons From The Cooking Vinyl Story is set for release early next year in association with Unbound.

The full line-up for the December gigs is below.