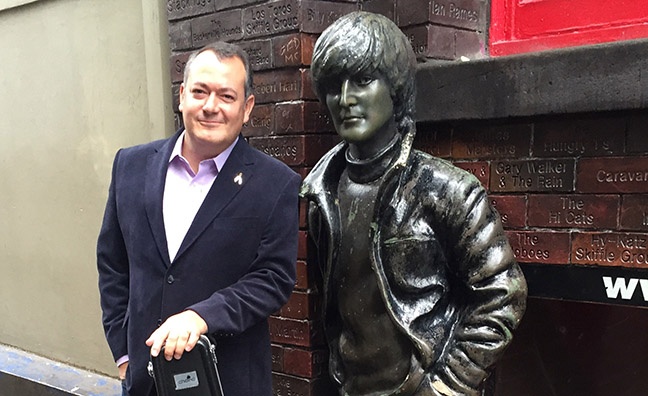 On the cover of the latest edition of Music Week, incoming UK Music Chief executive Michael Dugher outlines his stance on the General Election and Brexit, stating that he believes both offer crucial opportunities for the music business.

Catch up on the cover story here, and below, read on for our full and exclusive Q&A with Dugher, a former Shadow Secretary Of State for Culture, Media and Sport and Labour MP for Barnsley since 2010.

What made you go for the UK Music job?
I've spent 20 years in roles in Government and Parliament, across Westminster and Whitehall, I've got a certain amount of experience and this sort of opportunity doesn't come along very often. I've worked in Westminster and Whitehall for 20 years, but music has been my lifelong passion. It's an industry I care a great deal about. I've worked closely with UK Music in different roles over the years and I admire the work that they do. It's a fantastic opportunity and a really exciting, challenging time as well. We've got the election, there will be a new government afterwards and the big fallout from Brexit and the opportunities and challenges that that throws up for everyone. It's an exciting time to do what will be a really big, exciting job.

With the election, you’ll have to hit the ground running, won’t you?

There's an opportunity for UK Music during the election to be influencing all the political parties about the issues that are important to our members and to get to see the new Government. There may be a certain amount of continuity, we'll see how it goes, but there could be people in different roles, even if the Conservatives are re-elected. Then Brexit will dominate everything for the next couple of years and that's really a critical period for the industry, because we've got to make sure the things that are important to us and the protections we currently have from the EU are transposed seamlessly into the statute in the UK. But there's also potentially an opportunity in some of these trade deals to further beat the drum for the industry and the creative community.

Your political credentials are pretty clear, but what's your music experience?

I have a lifelong passion for music. I'm a self-taught musician, I play lots of instruments, I still gig occasionally. I sing, play guitar, bass, piano and annoy people to varying degrees with other stringed instruments like banjos, mandolins and ukuleles. I've been involved in the all party group, I've worked with UK Music over the years, I was Shadow Secretary Of State For Culture. Some of the industry will have seen some of the work I did on venues during that time as well, although it was a small but perfectly formed tenure as Shadow Secretary Of State, we did do quite a lot I think. I've done things at a local level, I helped establish the Live In Barnsley festival, which I'm patron of and which gets 5,000 people a year. I’ve guest presented music shows on local radio from time to time, I'm patron of a brass band. I played the Cavern Club last year, which was on my bucket list. I've worked in politics for most of my working life – which is the reason they've hired me for the job, because they want somebody who understands Westminster and Whitehall. I've had a life working in politics but a lifelong obsession with music.

As a politician, what do you make of the music business?

They've got a strong case. One of my frustrations was always, when I was Shadow Secretary Of State, is that this is an industry that should be treated like any other big industry. It's not just a 'nice to have', which is sometimes how the creative industries are viewed [by Government], they should be seen like any other hugely successful, important British industry that's absolutely, strategically important for the British economy. When you look at the huge contribution it makes to the economy and trade and exports and tourism, that's the substance of their case. UK Music does a lot of important work on education, apprenticeships, diversity – I've been impressed with them over the years and if I can help take it forward then that's great.

Should the Government do more to help the business?

I think all governments can do more and that's about the industry continuing to bang the drum. Brexit is going to dominate everything for the next couple of years but the stuff we did on the decline in venues, that's extremely worrying, that's not just an issue for central government in terms of planning, it's an issue for devolved authorities, the London Mayor and the new metro mayors in Merseyside and Manchester and the West Midlands.

Jo Dipple is going to be a tough act to follow, isn’t she?

She is, definitely. She's done a fantastic job in the last five years as chief exec and was obviously involved before that as well. She's showed tremendous energy, she's really professionalised the operations of UK Music. As someone who's been sat in Parliament for the last five years, I saw the output that UK Music produced, they produced good quality materials, organised good events and they're a tough organisation that all politicians of all parties have had to sit up and listen to in recent years and I hope that'll continue.

As chief executive of UK Music, you’ll preside over different groups with different agendas, some of whom sometimes completely disagree with each other… Remind you of anything?

(Laughs) Nothing could be like being back in the Labour Party! But that's part of its strength, its diversity. It's a challenge, but it was no mean achievement to create UK Music. I don't see much else like it elsewhere in the world, America certainly doesn't have anything comparable. Occasionally there are going to be issues where there are differences of opinion and different objectives and they've got to be managed like anything else, but their diversity is the key to their strength. The fact that they can bring the industry together from every corner is what gives it its power.

What music do you listen to?

I've never understood why colleagues of mine, when you've spent all week in Parliament debating politics with one another, their idea of R&R is to sit and watch BBC Question Time, a bunch of people like them having the same conversation they've had all week. When I come home on a Thursday night, I'd much rather play an album or watch some music on the telly. I have musical obsessions, bands I've played to death. I'm a big Beatles fan. This is really one for the nerds – I have a playlist I'm doing at the moment and I guarantee I'll be the only one of your readers that would buy this, if it came out. My playlist is The Triple Album The Beatles Would Have Made Had They Still Been Going In 1973. That's not much of a title but it enables you to put together the best of [John Lennon’s] Mind Games, [George] Harrison had some great stuff, Ringo [Starr] was doing hit singles, [Paul] McCartney’s got Band On The Run. It’s for my personal amusement on the train as I commute but that’s what I spend most of my spare time doing. I buy mainly on iTunes, crackly stuff from the 20s, I was playing Chuck Berry a lot recently, who was a big hero of mine. It was the 100th birthday of Ella Fitzgerald, which was a good excuse for me to get my vinyl out. I bought a load of ‘50s rock’n’roll on Record Store Day, I’ve got young kids so I’ve taken them to One Direction and we listen to Adele in the car, so we listen to absolutely all kinds of stuff. I love Neil Finn, he’s one of my great heroes.

Have you not joined the streaming revolution yet then?

Streaming is brilliant for the industry and everyone else loves it but, for me, it’s like having a library card. Whereas I buy vinyl or order CDs online and buy a lot of stuff on iTunes. I spend a lot of 79ps on obscure blues records from the ‘20s and ‘30s. But anyone who’s ever worked for me in my office, streaming’s the thing for them, so I suppose I’m a bit of a dinosaur.

You’re joining at a good time for the business…

It’s great for the labels who’ve increased in revenues and I hope it’s good for the creators, I hope they get their fair share in terms of a payday, because it has been tough. One of my worries is we seemed to have gone full circle at one stage. You had guys in the ‘50s and ‘60s who all got ripped off. That got better as musicians took lawyers into meetings and the laws got changed. But then, with illegal downloads, you were getting a situation with writers and musicians not getting paid again. Getting through that period has been massively challenging for the industry, which is why streaming is such good news.

And if Jeremy Corbyn wins the election, will you be OK lobbying him?

(Laughs) Well, presumably he’ll make Tom Watson, who’s one of my oldest mates in the world, Secretary Of State For DCMS, so that’s OK. But I’ve got lots of friends on the Conservative benches, Nigel Adams who’s chair of the APPG grew up in my constituency and got elected the same year as me. Music is a non-partisan issue and it’s really important that that continues to be the case. And this job is absolutely non-partisan. It’s not about left or right or Labour or the Tories, there are some Parliamentarians who really get this industry and who love their music. They’re on all sides of the political divide and it’s my job to engage with all of them.