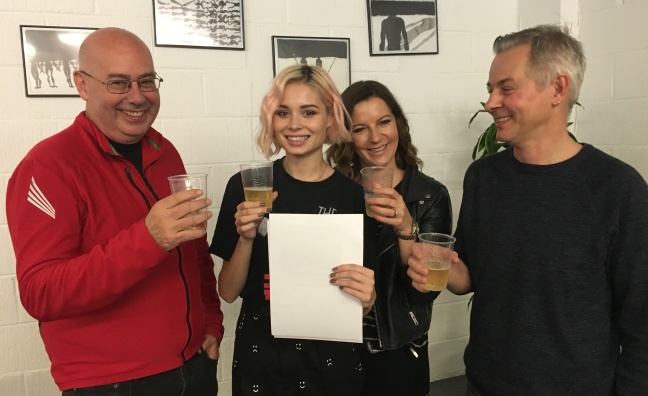 The agreement will see Nesbitt’s as-yet-untitled new album - the follow up to 2014’s Peroxide - released in the spring. Nesbitt previously signed to Island Records in 2012 and released EPs alongside her debut album Peroxide.

Cooking Vinyl MD Rob Collins said: "I saw Nina play six months ago at the Scala and it was one of those moments like seeing Ryan Adams solo when Heartbreaker came out. I knew on the spot that I wanted to make a record with her.”

Edinburgh-born Nesbitt started her music career by writing and recording songs in her bedroom and uploading the videos to her own YouTube channel. Ed Sheeran was an early fan of her work and invited her to support him on his European tour and to appear in one of his videos. She was reportedly the subject of the song Nina, from Sheeran's second album x.

Her manager Vicky Dowdall, of VDM Music, said, “I'm extremely proud that Nina has signed to Cooking Vinyl. It's sometimes hard for artists when they come out of major labels. They are often overlooked or seen as 'old news' in the industry, which makes it hard for the artist to move forward and for the manager to get a new deal. Real talent always shines through and that's proven by some of the most successful artists in the world who have been through exactly the same thing. It shows strength and self-belief and Cooking Vinyl spotted Nina's talent straight away. We are very excited about 2017.”

Nesbitt added: “I'm really excited to announce that I'll be putting my next album out on Cooking Vinyl. There are many paths to get to where you want to be and mine has certainly been a challenging and exciting one so far. Working with the Cooking Vinyl team feels like a big step in the right direction and it's going to be a very creative and collaborative experience for myself and my manager and I can't wait to get started.”