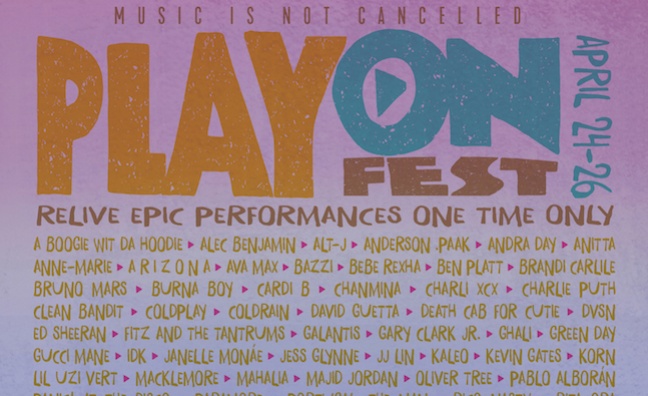 Warner Music Group has launched PlayOn Fest to support the Covid-19 Solidarity Response Fund for the World Health Organization (WHO), powered by the UN Foundation.

Set times are set to be released this week for the livestream of archive material. It will feature rare footage from WMG acts including Bruno Mars, Coldplay, Green Day, Cardi B, Ed Sheeran, Janelle Monáe, Twenty One Pilots, Lil Uzi Vert, David Guetta, as well as a look back at Nipsey Hussle’s Victory Lap album release show.

Launched by LL Cool J at 5pm BST on Friday (April 24), the livestream will run for 72 hours via Songkick’s YouTube channel. Warner Music Group has also launched a pre-sale of exclusive PlayOn Fest merch, with all proceeds going to the Covid-19 Solidarity Response Fund for WHO. In addition, fans will be encouraged to click-to-donate throughout the three-day-event.

Cardi B said: “Don’t play yourself! Tune into PlayOn Fest April 24-26 and help us raise money for the World Health Organization to boost Covid-19 relief funds. Thank you to all of the healthcare workers who are dedicating their services and helping to save lives! Since I can’t get on stage right now, I’m throwing it back to my party at the Global Citizen Festival to hopefully send some love and light to y’all. Stay safe everyone!”

“During this pandemic, we are all searching for ways to stay connected,” said Elizabeth Cousens, President & CEO of the UN Foundation. “The PlayOn Fest is a great way to come together, enjoy good music and company, and support the World Health Organization’s most urgent global work to combat Covid-19.”

Warner is promising material that has never been seen on YouTube including:

- Coldplay (taken from the band’s São Paulo, Brazil show during their A Head Full Of Dreams Tour in 2017, which became the third biggest tour of all time).

- Bruno Mars (24K Magic Live at the Apollo – Mars’ first primetime special that was recorded from the stage of the legendary Harlem theater in 2017).

- Panic! At The Disco (shot during their sold-out arena tour at the famed O2 Arena in London in 2019).

- Ed Sheeran (taking his stadium show to the intimate Austin City Limits stage for a special performance on the iconic PBS series in 2017).

- Korn (a performance filmed inside of a living art installation celebrating the release of their 2019 album The Nothing).