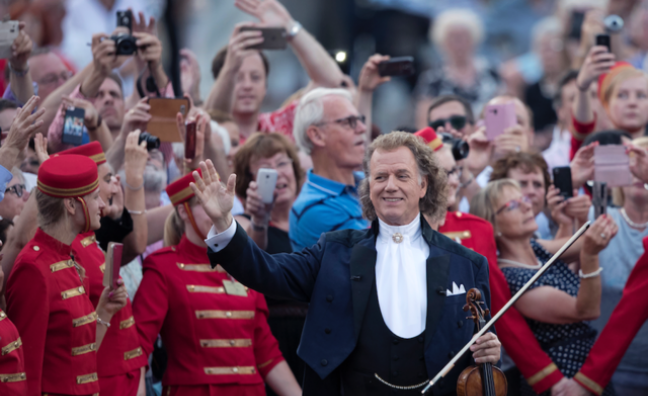 André Rieu has broken his own box office record with Maastricht Concert in Cinemas, which has become the highest-grossing weekend opening for a music concert.

The concert, which was broadcast across 586 locations in the UK and Ireland on the weekend of July 22-23, has grossed more than £1.44 million at the box office. It broke Rieu's previous record, set in 2016, and coincides with his celebration of his 30th year in the Johann Strauss orchestra.

Participating sites are up 50% to 1,200 across the whole of Europe: the concert will be screened in 700 more cinemas across Europe, including Belgium, Denmark, Spain, Poland, The Netherlands and Israel. A second wave of screenings are due to be held in France, Germany, Mexico, Argentina and Brazil later this year, bringing the total of participating cinemas to over 1,500.

Caspar Nadaud, CEO of Piece Of Magic, commented: “We are very proud that POM managed to increase both box office and amount of cinemas across Europe considerably from last year. This is a great sign that exhibitors have strong trust and belief in our marketing and bespoke campaign strategies, especially introducing local hosts for all key territories.

"We are looking forward continuing building the André in Cinema brand and to use our experience and know how to work with other artists and organisations in the near future.”

Further encore screenings will take place across the UK and Europe on Sunday 30th July.