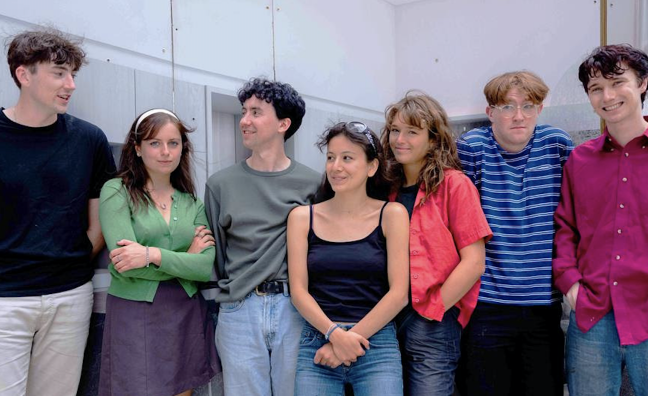 Top 5 indie act Black Country, New Road are among the artists set to play this year’s online edition of SXSW Festival as part of the British Music Embassy line-up.

Music Week On The Radar stars Baby Queen, Katy J Pearson, Olivia Dean, Sinead O’Brien and Ider are among the 35 acts set to showcase at the event, which is being held between March 16-20. The Association Of Independent Music (AIM), BBC, BPI, the Department for International Trade, PPL, PRS For Music and PRS Foundation work together on the British Music Embassy, which would normally be taking over an Austin venue during SXSW. ATC, DIY Magazine and Belfast City Council are also supporting this year’s line-up

The executives behind the showcase have said the virtual incarnation of SXSW will be a valuable opportunity for emerging UK acts during the pandemic.

Geoff Taylor, chief executive at BPI, BRIT Awards and the Mercury Prize said: “The BPI relishes once again partnering with the British Music Embassy at SXSW, which has become such an important staging post for rising UK artists as they look to develop their global following. British music is loved the world over, accounting for one in every 10 streams, but thanks to the immediate global reach that streaming now gives artists, there is a unique opportunity for British music exports to grow even more and double to over £1 billion this decade. Events such as SXSW, which are so keenly anticipated, have a crucial role to play in helping to realise this potential by showcasing the best of British new music talent to the rest of the world.”

PPL CEO Peter Leathem said: “SXSW is a major showcase of musical talent from around the world, and this year will be no exception even though we can’t be together in-person. It is still a fantastic opportunity for up-and-coming UK talent to establish new audiences and connections around the world that will help them develop their careers. Such international connections can be vital to a successful career. Of the royalties that PPL pays out, one third comes from countries outside of the UK, and SXSW offers an entry to those markets. PPL is proud to partner with the British Music Embassy and create such a platform, all while celebrating new UK music. We look forward to seeing the artists perform and wish them the best of luck.”

Andrea C Martin, PRS For Music CEO, said: “While we can’t currently enjoy live events standing side-by-side, we are glad that emerging songwriters and composers still have opportunities to perform as part of global events such as SXSW Online 2021. The British Music Embassy continues to offer an international platform for some of the UK’s most promising new acts to showcase their exceptional talent, with the chance for their creativity to be experienced by fans and industry the world over. We are proud to support the future of British music and once again partner with the British Music Embassy.”

PRS Foundation CEO Joe Frankland added: “Showcasing in overseas territories has proven to be crucial to progressing talented UK music creators’ careers and their sustainability, which is why at this unprecedented time it is so important we have adapted our International Showcase Fund support to enable export ready artists to still be able to showcase at key overseas events such as SXSW. I’m delighted that we are supporting at least 15 artists to showcase their performances at this year’s event and that the International Showcase Fund partners, together with our friends at the Department for International Trade and the BPI, have forged a UK Sounds opportunity and platform for export ready music creators and to shine a spotlight on talented underrepresented groups in the UK.”

Singer songwriter Lilla Vargen said: "The past year has been devastating for live music, and SXSW being able to go ahead in some form is a light at the end of the tunnel, and hopefully can signal the return of more opportunities like this. I can’t wait to head to Austin when it is safe to do so.”

Paul Pacifico of AIM said that SXSW remains a “stepping stone” for artists. "We’re delighted to be returning as a British Music Embassy partner for SXSW 2021,” he said. “It has always been a key stepping stone for the careers of independent artists, and a valuable way to accelerate their journeys on the international stage. Although we can’t attend in person this year, the positioning of British Music within the virtual showcase platform is the next best thing and a crucial moment to showcase exciting British talent to the world.”

Alex Bruford, CEO at ATC Live added: “ATC Live’s 2019 showcase at The British Music Embassy in Austin, Texas was a highlight of the year for us, featuring incendiary performances from artists including Fontaines DC, Georgia and Black Midi, who all went on to become Mercury nominated. We are thrilled to be back again with The British Music Embassy and partners in 2021, and are proud to present London based Anna B Savage and her deeply intriguing songwriting, scorching garage rock from Manchester’s The Goa Express, boundary blurring rap from Indian-born, London raised Nayana IZ and the effortless lo-fi folk and glistening pop of Bristol’s Katy J Pearson.”

The full British Music Embassy line-up for SXSW Online 2021 is below: