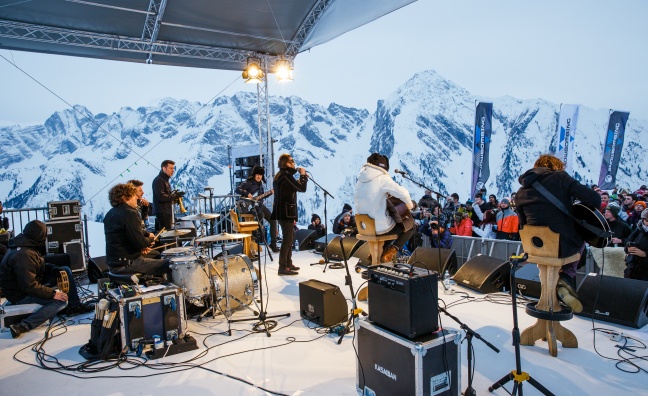 Broadwick Live boss Gareth Cooper has told Music Week that lining up Stormzy to top the bill for Snowbombing's landmark 20th edition demonstrates how far the festival has come.

Europe’s largest "show on snow" returns to the Austrian ski resort of Mayrhofen from April 8-13.

The BRIT Award-winning grime artist will not only headline the event but is also curating two nights himself, billed the #Merky Takeover.

“That’s an example of the pulling power of Snowbombing,” said Cooper, speaking in the latest issue of Music Week. “Stormzy wanted to play the festival and to curate a programme as well, so we are allowing him to programme two of the nights within the event. He’s bringing some of his boys to do the music and we’re supporting his charity.

Artists to have graced its stage in the past include Kasabian, Ed Sheeran, Madness, Foals, Fatboy Slim, The Prodigy and, last year, Liam Gallagher. While the winter sports aspect of the festival was once the main draw, Cooper says that music is now its main selling point.

“If you’d asked me that 10 years ago I would have probably said it is a cross between ski and music. Now I think it’s music," he said. “So many acts come back and play again and again. A lot don’t just come for one day, but three or four days. It’s quite nice for the customers that they can be on a chairlift with Fatboy Slim.”

First staged in 2000, early editions of Snowbombing were held in France and Switzerland, and Cooper credited the switch to its current site in 2005 as a turning point.

“Mayrhofen made the event economical," he said. "It’s difficult when you’re dealing with French resorts because they can be one-dimensional in terms of accommodation, whereas every type of budget is serviced in Mayrhofen. Our entry price goes from about £269 to £1,500, so it satisfies every need."

Subscribers can click here to read the full interview with Cooper.