'It's bigger than ever before': Independent Venue Week marks fifth edition 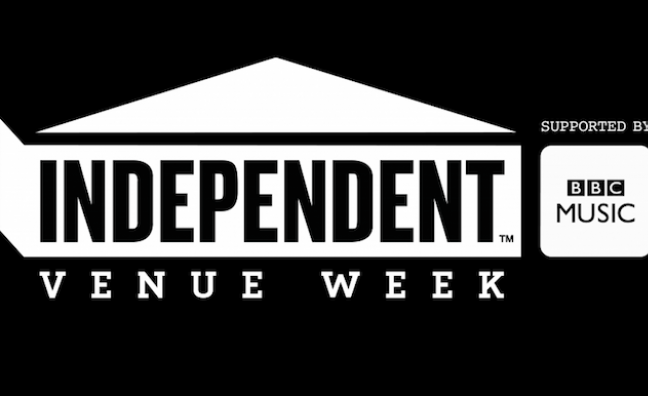 Independent Venue Week is back for 2018 – the fifth edition of the initiative – with more venues involved than ever before. IVT has secured 172 venues ranging from the 3,100-capacity The Troxy in East London to the tiny Grayston Unity, Halifax, which can fit just 22 gig-goers.

This year the celebration of small venues has also signed up BBC Music as an official partner, with content online and on air across various networks. BBC 6 Music’s Steve Lamacq is championing Independent Venue Week with a tour for his show including The Boileroom in Guildford (January 30), The Cookie, Leicester (January 31), Trades Club, Hebden Bridge (February 1) and Studio 2 in Liverpool featuring Idles (February 2). Here, founder Sybil Bell tells Music Week about why small venues are vital for the biz…

It’s going really well, it’s been our most challenging one because it’s bigger than ever before. BBC Music is a fantastic partnership because it enables the venues to feel part of something big for a week.

Who else supports Independent Venue Week?

Arts Council England are our biggest backer, along with Creative Scotland and Arts Council Wales. From the music industry, we have PRS Foundation, PRS For Music, the Musicians’ Union and Backstage Academy. This year we’ve done a partnership with the BRITs as well, and we’re going to see if we can grow that partnership for next year. We work with Help Musicians UK, who are our biggest charity partner. Vauxhall are back this year, we are working much more closely with Marshall, and we have Vevo, Fred Perry and Signature Brew.

Why’s it important to salute the role of small venues?

The bands can get bigger, they can go on to play stadiums, arenas and festivals. The venues don’t change, that is their core business: to get these artists very early on in their career. Yes, they can have sell-out shows, but they still have to take a punt very early on and put the artist on and rely on people going to listen to them. It’s nice to be reminded of that.

It’s the fifth year – can it keep growing?

I think it will keep growing, we’re at 172 venues now. It’s grown 10 times in the five years that we’ve been going. What we’ve enjoyed seeing this year is that we’ve taken on more venues in secondary and tertiary locations. We’re seeing a lot more venues come on board in places that are not on the touring circuit. It’s great for artists to have somewhere local to them where they can go and learn their craft, and for the community to go and enjoy music. The other thing we’re keen to develop is getting bigger artists to come back and play smaller shows, and give something back to the venues where they started. It would be great to see a bit more of that. We’re also filming a documentary this year.

We’ve got 84 venues that have never been part of the project before. I know people like to talk about closures, but we’ve got 19 venues that opened one year ago or less, which I think is really exciting news. The youngest venue that only recently opened [this month] is The Horn at the Half Moon in Bishop’s Stortford.

So is there a positive story for small venues?

With the ‘agent of change’ principle going through Parliament, I think the noise around the small venue circuit has never been louder and more people are listening. I think the battle has always been that it was called a ‘toilet’ tour and that it was seen as noisy, but they’re still creative cultural hubs – it doesn’t mean they don’t need protecting. I think the circuit is getting a lot more understanding and a lot more love now.

Are promoters keen on IVW?

Are there any personal highlights this year?

Gaz Coombes [at the Cookie] in Leicester [January 31], I think that’s going to be a great show. Nadine Shah is playing up in Hebden Bridge [The Trades Club, February 3], she’s one of our ambassadors. Adrian Utley is curating a jazz show in Bristol [Crofters Rights, today] which is also going to be great.