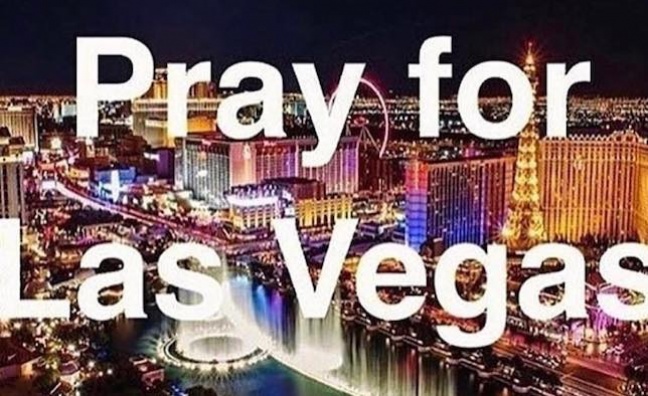 Live Nation has issued a statement saying that the company is "heartbroken" over the tragedy at the Route 91 Harvest festival.

At least 58 people have been killed and hundreds injured in a mass shooting at the festival in Las Vegas during a performance by headliner Jason Aldean. A gunman opened fire from the 32nd floor of the Mandalay Bay Hotel towards the festival.

Police say the gunman, named as Stephen Paddock, killed himself as officers stormed the room where 10 weapons were found. The attack is the worst mass shooting in recent US history.

The festival, attended by around 22,000 fans, featured Jason Aldean, Jake Owen, Luke Combs, Dylan Scott and Big & Rich. Witnesses say Aldean was near the end of his set when the the shooting began. He posted on social media that the attack on the festival was “beyond horrific”.

Tonight has been beyond horrific. I still dont know what to say but wanted to let everyone know that Me and my Crew are safe. My Thoughts and prayers go out to everyone involved tonight. It hurts my heart that this would happen to anyone who was just coming out to enjoy what should have been a fun night. #heartbroken #stopthehate

Live Nation issued the following statement: “We are heartbroken over the tragedy that took place at the Route 91 Harvest festival. To think that anyone would want to inflict harm on a gathering of music lovers is beyond our comprehension.

“And while we are stunned and grieving over this incomprehensible act of violence, we know that this is a moment when we must come together to prevent more tragedies like this from occurring.

“Live Nation will do everything in our power to support the victims and their families through the aftermath of this horrendous event and extends our deepest gratitude to the heroic first responders who helped save as many lives as possible. To our Live Nation on-site employees, we cannot thank you enough for your bravery and perseverance over the past 24 hours and will ensure you have the resources and support necessary to heal from this.”

The following statement has also been issued on behalf of the Route 91 Harvest festival: "We are completely devastated by the event that occurred Sunday night. Our deepest sympathies go out to the injured and the deceased and their loved ones, senseless violence has claimed the souls of our fans and we have little in the way of answers.

"Our eternal gratitude goes out to the LVPD, Emergency services, security guards, and fans for their selfless acts of bravery while trying to help those in need.

"While we will try and move forward, we will never forget this day. We will NOT let hate win over LOVE. We will NOT be defeated by senseless violence. We WILL persevere, and honor the souls that were lost. Because it matters."

Our hearts are with the victims in Las Vegas, their families and loved ones who are grieving this morning and to our @LiveNation employees

I cannot believe what I am waking up to this am. None of us are untouched by this hate. It must stop. My heart's shattered #PrayForLasVegas

CMA & the Country Music community are deeply saddened today and send our support and prayers to all the victims in Las Vegas.

BMG CEO Hartwig Masuch said: “We are horrified by the events in Las Vegas overnight and relieved to report that all of our people have escaped uninjured. Too many others were not so fortunate. We send our condolences and best wishes to all of those affected by this dreadful act.”

Jon Loba, EVP BBR Music Group, said, “While our artists and staff are safe, our hearts are broken for those listeners in our extended family who just wanted to share a night of great music and the camaraderie that is the hallmark of country music."

Masuch confirmed that a reception in London tonight to launch Country Music Week and featuring BMG artists would go ahead in spite of the shooting in Las Vegas. “Faced with such horrific events, it is only human to consider cancelling,” said Masuch, “but everyone involved was unanimous in their determination to carry on. The spirit of music is the spirit of life and it will not be intimidated.”

Other artists at the festival responded to the developing situation via Twitter:

The three-day Route 91 Harvest Festival launched in 2014 as a co-production between Live Nation and MGM Resorts International, who tweeted their response to the shooting.

Our thoughts & prayers are with the victims of last night's tragic events. We’re grateful for the immediate actions of our first responders. pic.twitter.com/Arf8edj1iZ

Previous acts to appear at the festival include Keith Urban, Tim McGraw and Blake Shelton. Other artists have responded to the shooting as the news broke overnight in the US:

My heart is breaking for everyone in Vegas tonight. Simply devastating. So much loss.

My heart is breaking for everyone in Vegas tonight. Simply devastating. So much loss.

Woke up to the heartbreaking news from Las Vegas, my thoughts are with everyone and their families. Love. H

Praying for all the innocent victims and their families in Las Vegas - Céline xx... #LasVegas

Saying a prayer for all the victims & their loved ones, also for the residents & visitors of Las Vegas! This was a horrific act of terror!!