London Stadium's Graham Gilmore: '2018 is a statement year for music at the venue' 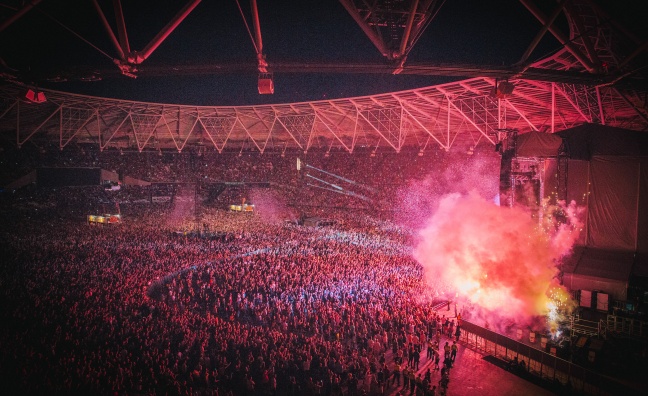 London Stadium chief Graham Gilmore has told Music Week the venue's summer music programme represents a huge "statement of intent" as it gears up to welcome Jay-Z and Beyoncé's On The Run II tour tonight (June 15).

“With the variety and magnitude of the acts performing at London Stadium in this summer’s concert series, it’s safe to say that 2018 is a statement year for music at the venue," said Gilmore. "It’s also a statement of intent. Each year we’ve gone from strength to strength, first establishing a foothold in the market in 2016 with AC/DC.

"In 2017, our weekend with Guns N’ Roses [pictured], Depeche Mode and Robbie Williams expanded further and 2018 really shows that London Stadium is the best live music venue, in its bracket, in London, if not the UK.

"London Stadium’s flexibility allows us to work to various capacities dependent on the seating configuration and sight lines. This allows us a huge general admission floor capacity of up to 40,000, something unrivalled in the UK. This is a unique selling point, and one that has certainly endeared us to rock bands and their fans."

The venue was given an additional boost last year when it hired Danielle Russell, formerly of Wembley Stadium, as its head of events.

"She is already working to fill our concert calendar for 2019 and beyond to continue London Stadium’s upward trajectory," said Gilmore.

"London Stadium 185 is continually striving to raise the bar and attract the biggest names in music to the venue, the hard work put in by our team and the acts performing here this summer is a real testament to our intent and talent."

Across the capital, Wembley Stadium welcomes back Ed Sheeran this weekend while The Rolling Stones return to London to play Twickenham on Tuesday (June 19). Tottenham Hotspur Football Club have also confirmed plans to host live music at its new stadium in 2019.