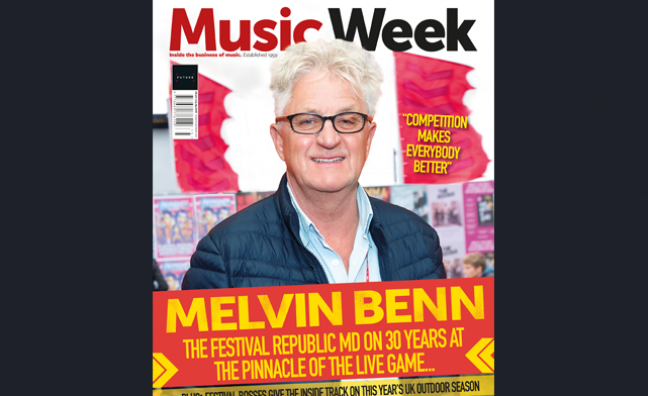 Reading & Leeds promoter and all-round live music legend Melvin Benn graces the cover of the new issue of Music Week, which marks the end of the 2018 festival season.

The Festival Republic MD takes us inside his company's memorable summer and weighs in on the current health of the sector as a whole.

Elsewhere, we gather a handful of the sector's leading lights as bosses from Boomtown Fair, Boardmasters, ArcTanGent, Black Deer and Bluedot give their verdicts on the past few months and ponder what next year may have in store, while Isle Of Wight Festival producer John Giddings takes centre stage in The Aftershow.

We meet Bristol punks Idles and their team as they stake a claim to be the UK’s most important band with their second album Joy As An Act Of Resistance, while we also present our second round of finalists for the fast-approaching Music Week Sync Awards.

In news, UK Music chief Michael Dugher explains why he has never seen the industry so united as the organisation leads the charge to secure EU copyright reform next week.

Jack Saunders tells us what to expect from his new late-night show, BBC Radio 1’s Indie Show With Jack Saunders, which launches this week, and Atlantic Records president Ben Cook predicts how former Vice Media exec Katie White will bring a new “mindset” to the label in the streaming era.

Captured Tracks/Sinderlyn head of digital Matt Brinkworth is this week's Rising Star, journalist Rhian Daly shares her favourite new sounds in Tastemakers and good-time hitmaker B Young is On The Radar.

As well as all that, there’s all the very latest news, charts and analysis, including our brand new Apple Music charts.