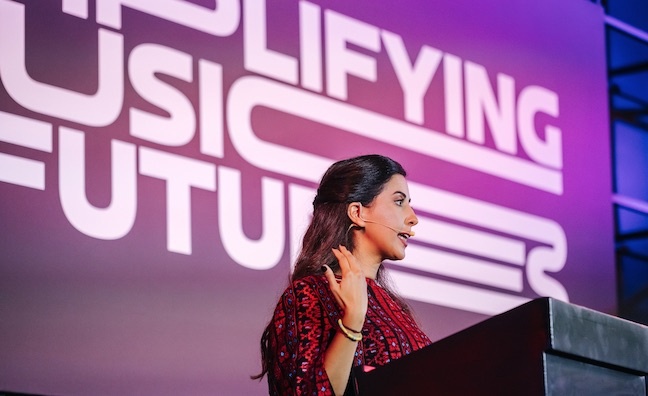 If the music industry has traditionally looked at South by Southwest when it comes to conferences and fresh talent, then this winter offers an opportunity to spin the compass and gaze on new horizons to the East.

Taking place in Riyadh, Saudi Arabia, between December 13 and 15, the brand-new XP music conference offers a key focal point for the new wave of music emerging from the Middle East.

“It’s fair to say that we are entering the most exciting time for the music industry in the Middle East ever,” suggests XP programme director Nada Alhelabi (pictured). “The opportunity is enormous, the potential is being unlocked, and what we need is a moment for the industry to come together to seize this chance with both hands. XP is that moment.”

Organised by MDLBEAST, whose own Soundstorm music festival also returns to Riyadh with a full line-up later this year between December 16 and 19, the three-day XP conference aims to bring together the industry, talent, and a whole spectrum of ideas and concepts as it looks to fuel the region’s potential, both in terms of the local market and the global impact its acts are on the brink of making.

“Saudi Arabia is experiencing an incredible transformation. Previously, our music community could only thrive underground, whereas now we are hosting major international artists and festivals with hundreds of thousands of attendees,” explains Alhelabi of the seismic artistic shifts they have experienced.

As a fresh new music conference, XP is ideally placed to make an impact that will immediately accelerate the Middle Eastern music scene’s growth.

“We have experienced positive feedback from the first edition of Soundstorm where international artists who performed at the festival had significant spikes in their demand even six months after their performance. This showed demand,” Alhelabi says. “What we have now is an opportunity which was not previously possible: an opportunity for artists, for labels, for promoters, for venues and for music fans. We have the audience, we have the talent, and we have the passion, but we need to build the infrastructure which will allow the industry to grow at its fastest possible rate across the region. XP is MDLBEAST’s effort to bring together the right people at the right time in the right place, to help grow this market and drive cultural and economic change. We want to take our talent to the world stage, to showcase regional culture and artists globally, and provide new Middle Eastern audiences for international talent – all the while building a self-sustaining music economy in the Middle East.”

Alhelabi’s sense of anticipation for her region’s music scene is palpable, as is her openness towards collaboration and engagement with the international music community.

The XP organisers believe their conference has the potential to be a foundation for change and innovation that will not just expand the impact of popular music within their own borders, but, as streaming has taken local hits to global prominence in recent years, will also infuse global markets with a diverse series of fresh new flavours.

“We have talent capable of wowing global crowds, we have huge potential audiences in our region who want to be part of a thriving music and creative scene, and we’re processing our policies to be able to accelerate our growth. More importantly, we are ready for it, and I think the enthusiasm and excitement we’re currently seeing in the region, and in Saudi specifically, is unmatched,” says Alhelabi. “The global scene thrives on diversity, creativity, new ways of thinking, and I believe that the Middle Eastern perspective is untapped.”

This ambition is represented in the four pillars that will guide XP in December. Discussions and events have been designed to help “develop and empower” local talent, while opening and expanding the region’s music scene will also be an important focus. However, to underscore and support these first two aims, the XP conference will seek to expand dialogue with policymakers to ensure the Middle Eastern musical echo system is developed in a manner that encourages sustainable, long-term success, while issues around its social impact will also be addressed.

With the event’s programme set to include events on prioritising environmental issues, mental health, and the empowerment of women, the cultivation of the people within musical communities – along with the music itself – is an important part of what XP’s organisers want to achieve.

When we created XP, we were thinking of the music industry as a whole ecosystem

"We want to gather the right minds in the room to cover everything, from how we can realise the creative economy of the future to learn about new music innovations and impactful partnerships, and to ensure positive impact extends beyond festivals and nightclubs penetrating communities to bring new opportunities,” suggests Alhelabi.

Tickets for the 2021 conference are now on sale and range from those that span the whole event, to various day and session options. Meanwhile, the full programme of events and speakers is currently being finalised, although several sessions and topics for this year’s event have already been confirmed.

The concept of music tourism will be examined in detail, along with ideas that can help put cities on the musical map, while talks about the needs of modern creatives and a session titled “It’s A Real Job, Mama” will aim to help the region’s talent make a true impact at home and beyond.

Additionally, a deep dive into the music industry’s social and economic impact on wider society, and another panel highlighting the benefits of a diverse workforce and the power of female representation within it, should ensure that the conference’s talks have a strong, catalytic impact across the region.

“When we created XP, we were thinking of the music industry as a whole ecosystem – the innovators, businesses, platforms, the regulators, and brands that allow the creative talent to spearhead their music careers and dreams. And at our music conference, they meet, discuss, and work together in ensuring we’re following a strong path of growth for the music economy,” says Alhelabi.

“So, XP is for everybody in the music and creative industry. It’s the perfect meeting point for global and regional music professionals, young creatives seeking inspiration and professionalisation, music and tech start-ups, and government entities that lay the future foundation for the region’s music industry.”

Uniquely placed to energise the Middle East’s musical scene at a point where fresh new creativity and audience enthusiasm is coming to the fore, while also establishing strong connections with the global music industry that will encourage collaboration and cross-pollination, XP’s organisers have set themselves an ambitious measure for success when it comes to this potentially transformative music conference.

“We want to be a symbol of music culture, anchored in the region but shared globally,” declares Alhelabi. “We want to be known both for amplifying the unseen and as a home for music lovers and creators. From the heart of Saudi Arabia, we are on a mission to develop the region’s music ecosystem and economy, plus we want to define the next generation of music and live entertainment, all while engaging youth around the world. We’ll achieve this through our landmark music festival, Soundstorm, our industry conference, XP, our label, MDLBEAST Records, plus a host of other cultural initiatives – and ultimately, we want to have a really good time doing it all!”