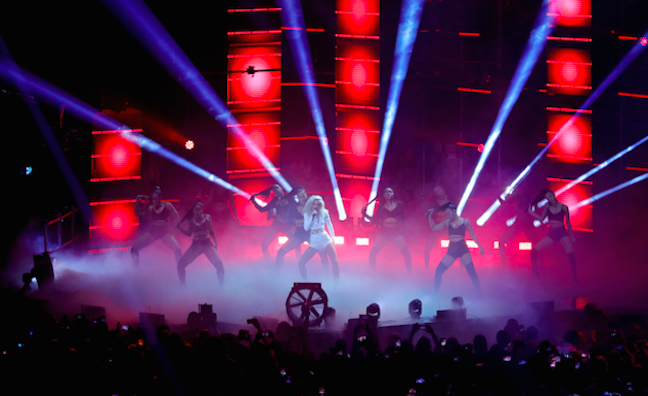 Last week, it was announced that the MTV EMAs will be held in London in November for the first time since 1996. The event will take place at The SSE Arena, Wembley on Sunday, November 12. Here, executive producer Richard Godfrey speaks to Music Week about bringing the show back to the capital.

Why was it the right time to bring the MTV EMAs back to London?

It’s involved quite a long series of conversations over many years. Everything has to align for it makes sense: it’s an obvious place to come, we’ve been here before and I’m very excited we’re finally doing it here again. It all made sense and it’s about time we came back.

It’s been a personal ambition of mine to do the show at The SSE Arena at Wembley, because I think it’s a great venue for this type of show. I’m sure people who have seen shows there will agree that with the right act, you get an amazing atmosphere.

What are your memories of the last time the EMAs were held in London?

It was in the very early days of the show, our third edition in fact. I remember we did it at Ally Pally and the traffic was so bad that Michael Hutchence had to get out and walk through the streets of Muswell Hill to get there. And then Oasis didn’t come and Metallica played an incredibly rude song. It was a proper rock’n’roll night that you’d expect from MTV in those days. These days, it’s a much bigger show that’s seen around the world and we’re going to put on something very special.

Since 2008 the EMAs have come back to the UK at three-year intervals, is that a conscious move?

Not really. I mean, the UK’s a big market for MTV and for Viacom, it’s the main market outside the USA for us and UK music offers great opportunities. It’s fantastic to do the show in a place like Liverpool, Glasgow or Edinburgh, because you get such great response. Londoners have great things happening all the time so we have to work extra hard to let people know this thing’s happening, and also that it's not just one big night, it’s a whole week of celebrations. We’ll be announcing, in due course, lots of other things that are going to happen around the show in the weeks leading up to it.

What are the biggest challenges with staging a production such as this?

It’s a big old show and moving venue and country every year is challenging. A lot of the people who work on it are Brits, so that helps - I will be able to go home afterwards for a change! We have to create a huge amount of backstage space - something like 3,000m² - which they don’t actually have as part of the venue so we’ll be using all sorts of buildings around the arena, ranging from part of the civic centre in Brent, to the Hilton Hotel, to parts of the stadium. When the Olympics were doing events up there, they did a similar thing and had to take a whole footprint around the arena. We’ve got great people who’ll pull that together.

Will public tickets be available?

Yes, definitely. We haven’t configured the venue yet in terms of our set design and that will affect the number of people that will be able to get in there. Obviously, there are various guest lists to consider but we try and make it as much of a public event as possible. Nearer the time, we’ll be announcing how people can get tickets or be part of the show. There’ll be all sorts of events in the week leading up to it so there’ll be lots of opportunities for people to taste a piece of it.

And what can you tell us about the line-up?

Every year we try and get the best line-up we possibly can and, now we have a date and a venue, we can start talking to people. There are some conversations that have already happened because people book their tours at least a year ahead now, so some people will just route us as part of their tour. Things happen so quickly these days that somebody who has a great year will be on, if it all works out. So I’m excited about who we can get and what the bill will be.