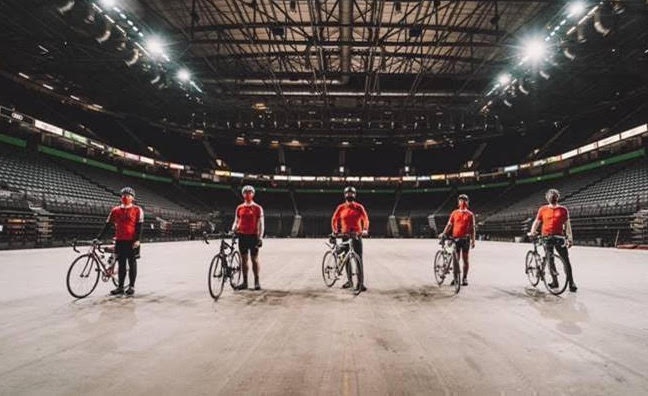 Five music industry events stalwarts have so far raised more than £30,000 after cycling 1,500km across the country.

The Survival Tour reached London at the weekend and called outside iconic venues in the capital, including O2 Academy Brixton, The O2, Alexandra Palace, Roundhouse, The SSE Arena Wembley, The Tabernacle, O2 Shepherd’s Bush Empire, Eventim Apollo and the Royal Albert Hall.

The five riders and driver of the support vehicle, provided by Crossland Bussing, all have established careers in the events industry, having worked with acts including Coldplay, The Rolling Stones, Taylor Swift, Roger Waters, Florence & The Machine, Mumford & Sons and more. Heading up the initiative are Steve Reynolds and Loud Sound colleague Mike Trasmundi, along with Mark Ward of Proper Productions and colleagues Harry Ford and Tyler Cole-Holmes.

Taking in more than 80km-135km each day over two weeks (October 3-18), #TheSurvivalTour represents the music industry touring season that never happened this year. The tour aims to raise awareness of the plight of the 600,000-plus workers in the UK outdoor events industry. It is raising funds for Backup - #WeMakeEvents’ chosen charity - that provides help to employees, freelancers and their families suffering in the entertainment sector, and will kick off Restart, the next phase of the #WeMakeEvents campaign.

“Our journey has allowed us to travel through more than 100 venues and festival sites in 13 days,” said Steve Reynolds, operations director, Loud Sound. “We know that there’s still much to do to get our message out there. We’ve met many people who have consistently told us about the dire straits that they and their colleagues are in. Most of our friends and colleagues work in this industry, we know their families and they are suffering. In fact, it’s like a big extended family, and we couldn’t stand by and let it just disappear without trying to help, raise awareness for the plight and fundraise at the same time.”

“Whilst some of the venues have received help from the Culture Recovery Fund, the vast majority of the supply chain has missed out on this,” said Mark Ward, director, Proper Productions. “These are the people working in the communities we have passed through. The fact that so many suppliers have missed out shows the size of the industry and the help that is still required. We all want the industry to bounce back quickly once we can reopen, however we need to retain the experience and knowledge inside our industry to allow this to happen.”

“Right now, tens of thousands of people who carry the UK's hugely successful live music and events industry are out of work, through absolutely no fault of their own,” said Gary White, lead producer, #WeMakeEvents. “The majority of these individuals are self-employed or sole directors of limited companies, and many have received no financial support throughout this pandemic. These amazing boys who have been cycling daily since October 3 and have been raising awareness across the regions of our industry venues, which are currently lying dormant. The money raised by the survival tour will be given to charity to support our industry families during this most difficult time. A huge thank you from all of us within the #WeMakeEvents family… outstanding efforts by all!”