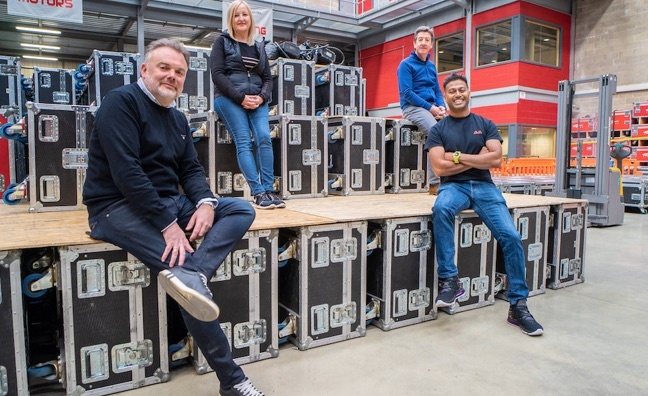 Just before every live music event starts there is usually a moment where the lights go down and for a brief few seconds everyone falls silent. As nerves and expectation ripple through the crowd, artists and organisers alike, the sense of anticipation is truly palpable.

For the last year the silence and nerves have been rebounding right across the events sector, but any feeling of anticipation has been crucially missing as the Covid-19 pandemic has brought live music to a standstill, casting a shadow over its future.

Aware that without hope or expectation live music could crumble away, a group of people whose lives depend on the sector came together to build a new anticipation by fighting for live music’s future. In the process, the global #WeMakeEvents campaign was born.

Jägermeister keenly understands the power of this sense of anticipation too. Not only are they renowned as one of the music industries favourite drinks, but they are also a long-term player in the live sector themselves, curating and organising their own events while working closely with artists, venues and promoters for years.

As a result of this relationship, they have focused the latest film in their influential Meister Series – a collection of documentaries that celebrate the innovators and mavericks within music – on the story of how #WeMakeEvents evolved from a local call for help, into a global expression of the power of live music.

“On behalf of everyone involved in #WeMakeEvents, we thank our friends at Jägermeister, Kinc and The Howl Creative for including us in the latest Meister Series film,” the group explain of having their story told in this new film.

“It’s a beautiful piece of work and plots our development from April 2020 when six of us decided to start a campaign to help the businesses and people in the live events supply chain, up to today, now with 40 countries aligned in a global movement.”

With the economic pressure of not being able to stage shows becoming crushing, #WeMakeEvents came together because they feared much of the live music ecosystem would never emerge from lockdown, initially staging a Red Alert day of action across the UK on August 11, last year.

With many key cultural institutions illuminating themselves in red lights for the day, along with support from the likes of The Cure, Peter Gabriel and more, this simple yet unmistakable action shone a spotlight on the plight of a million-plus professionals on the technical side of the industry who are in danger of seeing their livelihoods simply disappear.

This stark warning soon resonated around the globe, so #WeMakeEvents organised an international expression of solidarity on September 30, #StandAsOne day. Bringing together professionals, artists, event organisers and more from across the world, it highlighted how, without action and support, a cultural industry that thrived before the pandemic could quickly vanish.

Jägermeister’s Meister Series film acutely captures not just the urgency of #WeMakeEvents' message, but also the organic and passionate response to it that has led to the likes of the Glastonbury Festival, The O2, Radiohead, Massive Attack, Melanie C, Noel Gallagher, Coldplay, Skunk Anansie and more lending their support, while over 2300 buildings around the world were bathed in red to signify the danger to live music.

“We all live and breathe live events: the performances that delight, inspire and improve our fragile well-being,” the #WeMakeEvents team explain of their need to act. “While we are seeing some positive small steps in being able to return to audiences enjoying live events, we know that won’t happen overnight. It can take up to a year to plan a festival and tour, so we have to remain focused on generating charity funds and government awareness for those without work or income since March 2020, in order that, when that great day arrives, the curtain goes up and the lights come on, we have the people and skills to deliver the show.”

Following on from previous films that have celebrated independent festival Boomtown Fair, London underground event organisers LWE and the Women in CTRL collective, the Meister Series has offered a passionate and informed look at people whose innovation and ideas are driving the music industry, particularly at a time when it has grappled with the impact of the coronavirus pandemic. The #WeMakeEvents film charts both the response to a very real threat and the spirit to do different.

“It has been a tremendous honour to have #WeMakeEvents as guests on our Meister Series,” explains Tom Carson, Jägermeister’s UK music manager.

“With this series, we want to celebrate all the behind the scenes professionals who have found their careers and livelihoods suddenly halted. This is a tribute to their essential work and contribution to the music world we love so much. #WeMakeEvents' dedication to support and keep alive the events industry has been remarkable, an industry so close to our hearts and in which Jägermeister Musik is deeply rooted.”

It is a connection that has also been bolstered by Jägermeister’s Save The Night initiative which has supported artists, creatives, bartenders and more who are currently bearing the brunt of the lockdown, via a mix of donations, funding and online initiatives, including a series of Meister Classes. It is work designed to make sure that live music’s infrastructure, and crucially the people behind it, are still there as and when lockdowns are lifted.

As #WeMakeEvents has shown – vividly captured in the new film – if fans and the music industry want to enjoy those goosebump-inducing moments of anticipation that only live music can bring again, then the current silence must be filled with action.