Which UK cities have the strongest live music scene? 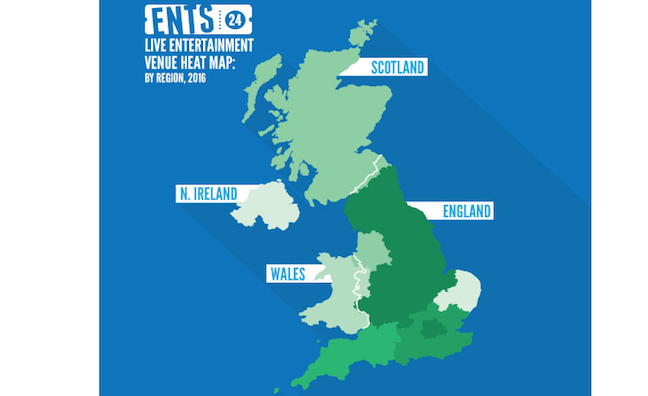 A new study from UK live entertainment guide Ents24 has uncovered the country’s 10 most lively cities for live events. And the results may be a little bit more surprising than you’d expect.

Drawing on data from millions of users tracking thousands of events at over 20,000 active venues, Ents24 first determined how postcodes compared in terms of live venues, before factoring in users' tracking activity and populations by postcode to arrive at an 'Event Popularity Score'. This shows which areas are punching above their weight when it comes to live entertainment in the UK.

Unsurprisingly, central London topped the chart by some distance, while Manchester, Liverpool, Bristol and Birmingham all featured on the list. However, there were a couple of key cities notable by their absence, as both Sheffield and Nottingham failed to make the Top 10.

The study also shows the effect of a city's ranking on ‘satellite towns’, with places such as Luton, Wigan and Walsall suffering from their proximity to live music and comedy hubs in Manchester, Birmingham and London.

“Over our 16-year history working with event organisers of all kinds, we've built an unparallelled nationwide database of venues, artists, shows and music fans and the interaction between them,” said Ents24's head of marketing Adam Brooks. “It's a body of data that is constantly evolving, and we're pleased to be able to put it to positive use, generating studies that contain information and implications for event organisers, touring artists and that are of interest to the wider live music and comedy industries as a whole.”

The top ten cities (by postcode area) are:

You can read the full Ents24 report here.