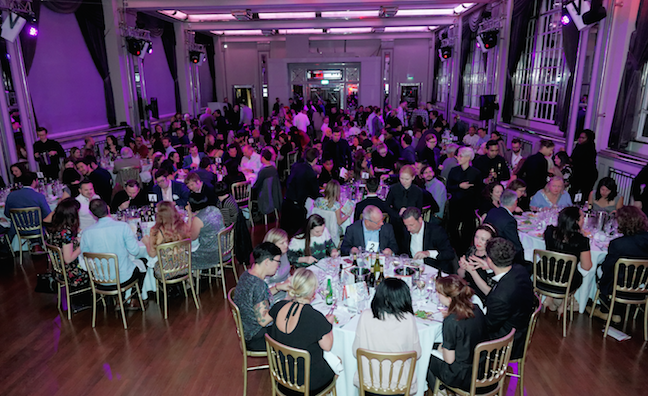 The third annual Music Week Sync Awards took place in London last night. And as the industry nurses its collective hangover from the post-show festivities, we take a look back at five amazing moments from the ceremony.

With so much to choose from, whittling down just five highlights from last night was a bit of a challenge. You can however, relive more of the evening's most memorable moment over at our Sync Awards 2016 Facebook photo gallery, featuring snaps of all the winners. Please be sure to tag, comment and share as you see fit.

A surprise win for BMG

Music Sales’ John Boultwood provided one of the biggest laughs of the night when he took to the stage to accept the Music Supervisor – TV Award on behalf of Iain Cooke, taking the opportunity to credit himself liberally in the rightful winner’s absence.

Jo Caulfield takes on the room

Acclaimed comedian Jo Caulfield was on hosting duties last night. And before the first award was handed out, she’d singled out several individuals for their ‘unfortunate’ headshots in the show supplement, whilst also identifying the three majors as the ‘axis of evil’. A bold approach to say the least.

UK performer Jamie N Commons brought a little glitz to proceeding when he took to the stage to receive the Sync Artist of the Year Award. Other contenders for the crown included Jess Glynne, Izzy Bizu and Mark Ronson.

Following the three-course meal and the awards presentations, the after party and its free bar were welcomed with open arms, as the post-show festivities ran long into the night.

For a re-cap of all of last night’s winners, see below.

Yes I Can - The Superhuman Band

Featured in: Philips - Innovation & You

You Don’t Own Me – Grace

Featured in: House of Fraser

All We Do - Oh Wonder

Stronger Than Ever - Raleigh Ritchie

Sync Artist of the Year

Overall Sync of the Year

You Don’t Own Me – Grace

Featured in: House of Fraser