Jim Steinman's Bat Out Of Hell: The Musical - The Music Week Review 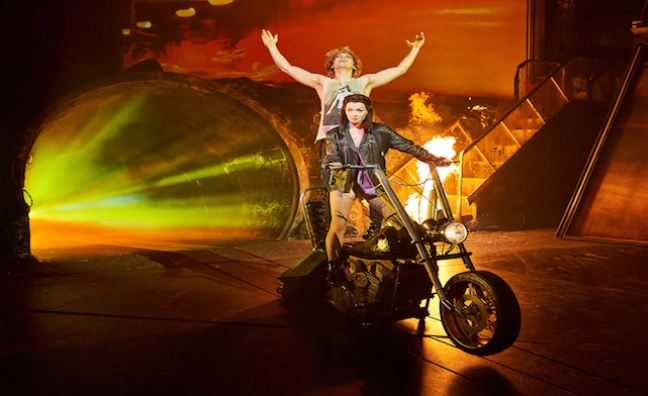 To say this particular musical has been gestating for a long time would be a profound understatement. This year, Meat Loaf and Jim Steinman’s rock odyssey Bat Out Of Hell is, in fact, celebrating its 40th anniversary - not an insignificant milestone for the music industry itself given Bat has sold 3.31 million copies in the UK alone, according to Official Charts Company data.

Yet the songs that comprise that seminal album were initially conceived by their creator Jim Steinman for something entirely different: a futuristic musical based on Peter Pan. A much-modified iteration of it has finally arrived in the form of Jim Steinman’s Bat Out Of Hell: The Musical, which officially premiered at London Coliseum this week (June 20), having debuted earlier in the year in Manchester. Yes, it does prove a timely celebration of Bat Out Of Hell, but it also deserves to be celebrated itself. On every level, Bat Out Of Hell: The Musical is a remarkable triumph.

First and foremost, this musical pays testament to the enduring, exuberant brilliance of Jim Steinman and Meat Loaf’s music. Speaking ahead of the premiere, one of the show’s producers, Michael Cohl, told Music Week he felt this production, “started out with probably as good a musical set of songs as any show ever – whether you go to the Abba Musical or West Side Story.” Assuredly, this is true. Songs like the title track, Paradise By The Dashboard Light and You Took The Words Right Out Of My Mouth were always charged with theatrical magic, but when brought to life with an all-singing, all-dancing ensemble they take on a whole new life.

This has everything to do with the cast. As producer David Sonenberg recently told Music Week – and as the intensity of Meat Loaf’s performance on the original Bat album shows – Steinman’s music is designed “to kill” whoever is singing it. To that end, the man with the big lungs to fill is Andrew Polec, who plays the lead, Strat. While it’s true no one will ever sing these songs like Meat Loaf, it’s also hard to imagine anyone else coming closer – certainly not when also being tasked with dancing, acting and constantly gyrating on a motorbike. He is essentially a Steinman song made flesh. Joining him is a similarly brilliant cast, Christina Bennington playing Strat’s love interest Raven with aplomb, especially when tackling Jim Steinman’s It’s All Coming Back To Me Now, first recorded by Pandora’s Box and later made famous by Céline Dion.

The story itself is a Romeo And Juliet narrative filtered through Peter Pan themes of eternal youth, all dressed up like the pages of 2000AD. Crucially, the Bat musical has emotional gears, too. It is frequently funny, not just because of Sharon Sexton’s whipsmart remarks as Raven’s mother Sloane – who at times threatens to steal the show away from under Polec’s nose - but also other cunning production tactics, including one utterly brilliant breaking of the play’s 4th wall – or more accurately the floor. This humour is matched by the musical’s ability to find genuine moments of poigniancy amid all the revving of motorbikes, and no more so than during a stellar run through Bat Out Of Hell 2’s classic Objects In The Rearview Mirror May Appear Closer Than They Are.

Underpinning all of this is the musical’s not so secret weapon: the remarkable stage design. By any standard the level of production is incredible, constantly throwing up surprises as the Coliseum’s immersive, ever-changing stage morphs from dystopian streets to highways and sewers, or else presenting the very fires of hell. Likewise, when Bat Out Of Hell – the song – reaches its trademark bike crash section, the slow-motion crash is a thing of wonder, as is the brilliant Rob Fowler (the play’s antagonist, Falco) getting, let’s say, a bit wet.

Closing with a triumphant I’d Do Anything For Love (But I Won’t Do That), this is a musical that not only brings Bat Out Of Hell’s incredible legacy full circle, it adds to it in a significant way. Here the magic of Meat Loaf and Jim Steinman is rendered undeniable.