Music Week's review of the year issue is out now 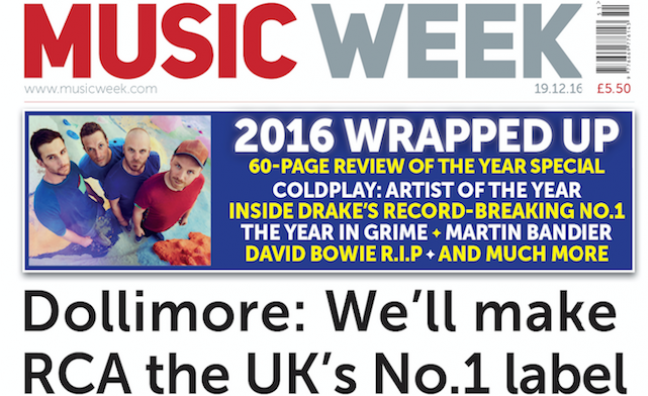 In this week’s bumper 60-page edition of Music Week, out now, we revisit the biggest music stories of 2016 in our review of the year.

There’s an interview with Coldplay members Chris Martin and Will Champion and their team as the band are crowned Artist Of The Year.

Elsewhere, we analyse the US biz’s move West, revisit a successful 12 months for Sony, pick apart a breakthrough year for grime and UK rap and interview the teams behind UK breakthrough acts Blossoms, Jack Garratt and Ward Thomas to uncover the stories behind their success. Drake’s mega hit One Dance is also analysed, as is the year in festivals.

Also divulging campaign tricks are comeback kings Rick Astley and Craig David, while Sony/ATV CEO Martin Bandier reflects on another successful year. We speak to industry voices to assess the issue of diversity in the music business and leading executives reflect on the good and the not so good of 2016.

At the end of a year during which many musicians and industry executives sadly passed away, we speak to Nigel Reeve, Warner Music International’s VP of global A&R and content development about the company’s plans for David Bowie’s music.

In the news, there’s an exclusive interview with David Dollimore, the new president of RCA UK and Ministry Of Sound. Dollimore also features in our in-depth analysis of Ministry Of Sound as it celebrates its 25th birthday.

We also have all the very latest news, views and charts from the past week.