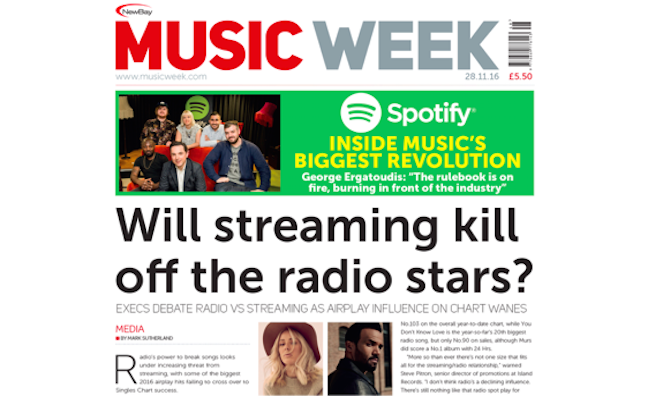 This week we take an extensive look behind the scenes at streaming giant Spotify, as George Ergatoudis takes the hot seat for our Big Interview.

In a Music Week exclusive, he tells us why he thinks it’s just a matter of time before pop heavyweights Taylor Swift and Adele fully embrace the streaming service, whilst also offering several other key insights into the firm’s UK operation.

We also meet the team behind some of the platform’s foremost UK playlists.

Elsewhere, Music Week investigates whether or not the influence of radio play on the charts is now on the wane, while the Syco’s head of A&R Tyler Brown, and head of marketing Alice Frost, discuss the campaign behind Little Mix’s recent success in both the official singles and albums charts and why their first UK No.1 record, Glory Days, has been five years in the making.

We also sit down with Dave Gahan and Martin Gore of Depeche Mode to talk through their plans for a new album and world tour in 2017.

And we have all the very latest news, views and charts from the past week.