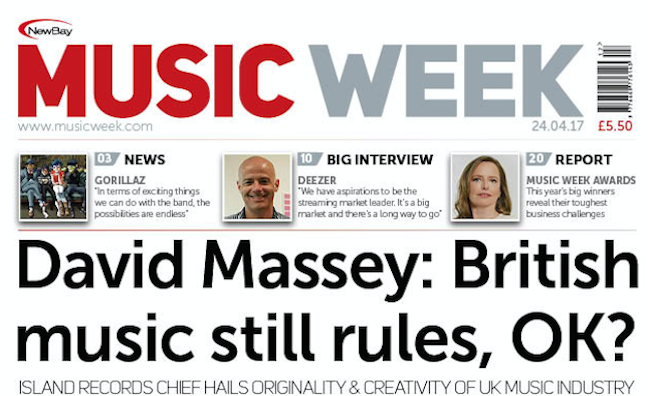 The new edition of Music Week is out now. This week’s cover story is an exclusive interview with Island Records chief David Massey, who hails the creativity and originality of the British music industry.

Massey, who is based on the other side of the pond, was speaking ahead of his appearance at MUSEXPO, which begins in Los Angeles on April 30. Also in this week’s issue are the eight things to look out for at the conference, whether you’ll be there in person or following via our Twitter feed and musicweek.com.

In the news pages, PRS For Music chief executive Robert Ashcroft discusses the organisation’s record-breaking 2016 performance, while we hear from Vevo on the value of their new artist-focused Lift platform.

We get the lowdown on Gorillaz’s new album campaign ahead of its release this Friday via Parlophone, while we find out how D2C helped Mike + The Mechanics into the Top 10.

This week’s Big Interview subject is Deezer’s VP, northern and southern EMEA, Phil Moore, who discusses the streaming platform’s plan to take on Spotify and Apple.

We report directly from the green room at the Music Week Awards 2017, where selected winners discuss their biggest challenges. Elsewhere, there’s a special report on the state of arenas, and a Viewpoint from Deviate Digital founder Sammy Andrews outlining her thoughts on achieving gender diversity in the music industry.

This week's On The Radar artist is north London rapper Avelino, while Sky Sports and Kasabian take the Sync Story slot.

As well as all that, there’s the very latest news, charts and analysis.