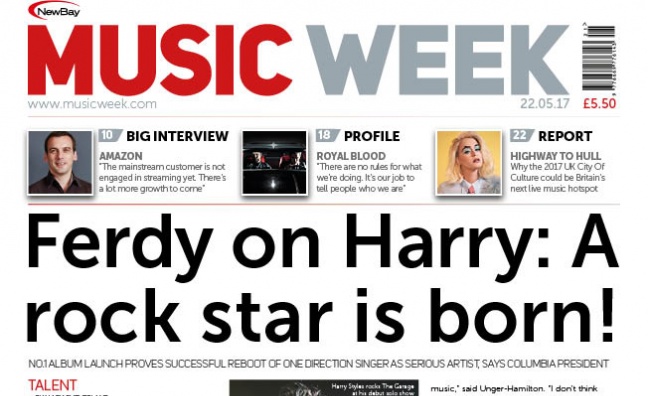 The new edition of Music Week is out now.

In our cover story, we speak to Columbia boss Ferdy Unger-Hamilton about the launch of Harry Styles' rock-oriented solo career after the One Direction man's debut album went straight in at No.1.

On the talent front, Mix Master Mike talks working with the Beastie Boys, virtual reality projects and DJ-ing for Metallica, while Royal Blood frontman Mike Kerr lets Music Week in on the rock titans' plans for world domination. Speaking of giants, this week's Big Interview is with Amazon's head of music Paul Firth and Amazon Tickets' GM Geraldine Wilson, who give insight into the company's plans in streaming and live music.

Leading British musician, producer and composer, Nitin Sawhney speaks to Music Week about his recent Lifetime Achievement Award at the 62nd Ivor Novello Awards and we catch up with music bosses at Wembley Stadium, as it celebrates the 10th anniversary of its official opening.

We explore what Hull's UK City Of Culture year means for the city's music scene and preview this week's International Music Summit in Ibiza.

Singer Stevie Parker is On The Radar, while Coco and BBC Sport's hook-up for this year's Snooker World Championship Final occupies our latest Sync Story slot.

In addition to all that, there’s also the very latest charts, analysis and news. Subscribe here.