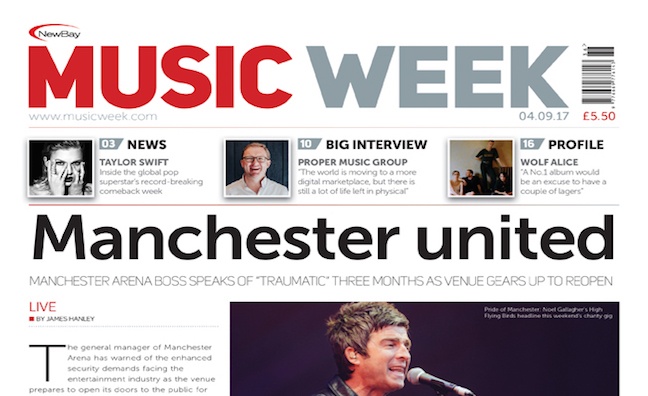 The new edition of Music Week is out now and, as Manchester Arena prepares to open its doors for the first time since May’s horrific terrorist attack, general manager James Allen discusses the re-opening and plans for increased security in and around the venue.

In the news section, we crunch the numbers on Taylor Swift’s record-breaking week as the superstar scores her first UK No.1 single — and catch up with Right Said Fred and their publisher as they prepare for a windfall from Swift’s surprise interpolation of their I’m Too Sexy hit.

Proper Music Group MD Drew Hill takes on the Big Interview, shooting from the hip about why the music industry shouldn’t even think about giving up on physical product just yet.

Elsewhere, we count down the 2016 music publishing market shares, talk to Wolf Alice and their team about their brilliant new album and catch up with JP Cooper as he crosses the billion-stream mark.

On The Radar this week are London-based indie trio Dead Pretties, while BBC Radio 1Xtra’s DJ Target recommends Lotto Boyzz in the Tastemakers slot. Bastille’s hook up with Amazon for new superhero series The Tick is this week’s Sync Story.

Plus there’s all the very latest news, charts and analysis. To subscribe and never miss a big music biz story, click here.