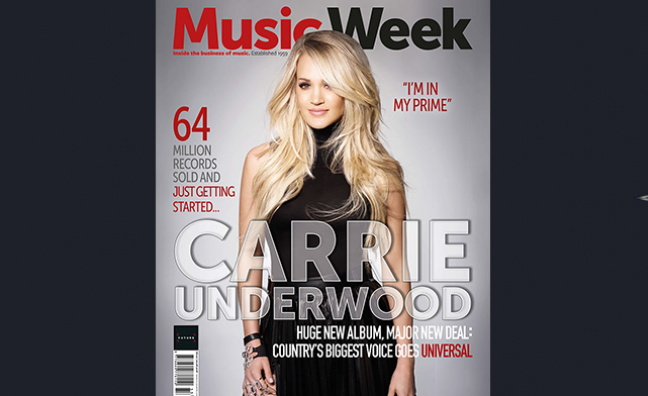 US superstar Carrie Underwood graces the cover of the new issue of Music Week, which is out now.

In a special report, Music Week shines a light on some of the most innovative developments in the apps sector, while Lost Village co-founders Andy George and Jay Jameson discuss the Lincolnshire event's organic growth ahead of this weekend's fourth edition.

Elsewhere, we present the first wave of finalists for the 2018 Music Week Sync Awards, which return on October 18 to celebrate the best of music in film, TV, advertising and video games.

In news, Reading & Leeds chief Melvin Benn takes us behind the scenes at this year's festivals in an exclusive interview and Deutsche Grammophon president Dr Clemens Trautmann tells us how the classical label is embracing streaming.

Sony/ATV head of A&R, UK, David Ventura, meanwhile, sings the praises of UK rapper Octavian, who has signed to the Sony/ATV and Stellar Songs JV worldwide.

Sync Story takes a look at the link-up between Adidas and Everyone You Know. To subscribe and never miss a big music biz story, click here.