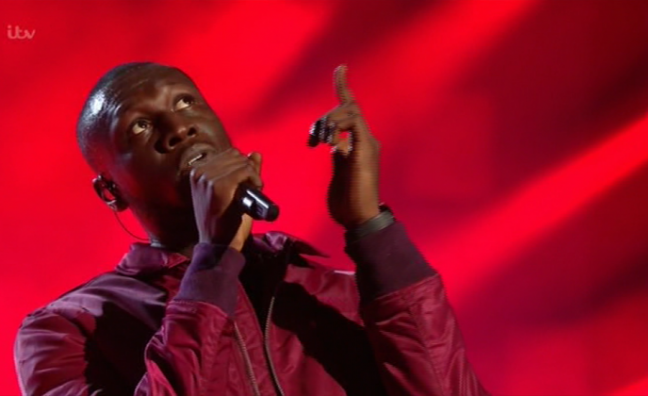 Stormzy has returned to the Top 10 on iTunes today off the back of his performance of Blinded By Your Grace Part 2 with Labrinth on the X Factor live show on Sunday (October 29).

Both his debut album, Gang Signs & Prayer, and the gospel-tinged single are in the iTunes Top 10 today. It was Stormzy’s debut performance on the ITV talent show, though he appeared the previous week to assist Nicole Scherzinger in the judges’ house.

During the second live show of the series, Talia Dean was voted off after receiving the fewest votes following her rendition of One Direction’s What Makes You Beautiful.

Stormzy described his appearance as a “big moment”. However, the X Factor performance was soured by the reaction of MNEK, who was apparently replaced by Syco artist Labrinth for the TV performance.

Mad love to everyone that tuned in it means a lot that was a big moment for me thank you ??

guys what do you do when youve come back from a date to find out that Labrinth was singing your song on X Factor instead of you? cos rn idk

Gang Signs & Prayer, released on the rapper’s Merky label and distributed by ADA, has sold 228,089 copies according to the Official Charts Company. Last week Stormzy won two awards at the GRM Daily Rated Awards, following a win at the Q Awards; he’s also nominated for five MOBOs. He was a standout performer at the televised Hyundai Mercury Prize last month.

X Factor contestant Grace Young is also high on iTunes today with her own song, Too Young. Rak-Su, who received the highest number of votes from the public, also performed an original song.

Simon Cowell pulled out of the weekend’s live shows after health problems.