Supersonic director Mat Whitecross on Oasis reunion: 'It should happen' 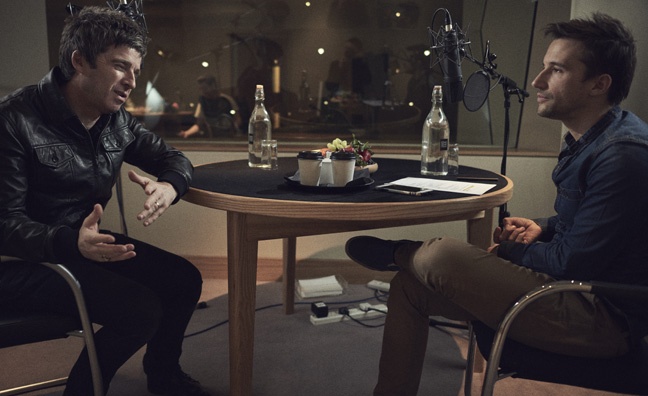 The director of new Oasis documentary Supersonic sat down with Music Week for a Q&A ahead of the film’s general release this weekend.

Made by the production team behind the Academy Award-winning Amy Winehouse film Amy, Supersonic covers the band’s early career up to their two sellout nights at Knebworth Park in 1996, for which 2.6 million applied for the 250,000 tickets, just two years on from the release of their debut album, 1994’s Definitely Maybe.

Here, Whitecross (pictured, with Noel Gallagher) discusses the making of the film, whether the band should have called it quits after Knebworth and the chances of an Oasis reunion…

Why did you want to make Supersonic?

I was a fan but, unconsciously, it must've been on my mind that this extreme version of [the Gallaghers] is what remains in people’s memories. That’s probably because of the tabloids and the caricatures that got created around them. I think that’s a real shame because there’s so much more to them than that. They’re such nuanced, incredible personalities. They’re so smart, they’re so funny and they’re so passionate about music.

What made you decide to only cover their career up to 1996?

Once you become a big rock band, the years are kind of all the same. The music's different, but you're playing the same venues and the process is the same, whereas when you're on the way up, that's always unique. And I felt like the velocity of their ascent, for want of a better word, and the intensity of that process with Oasis, has never happened before and probably will never happen again, I imagine, because the music industry's changed so much. Even The Beatles, who invented the rulebook as far as rock bands go, didn't [rise] quite as fast as Oasis - and that's an incredible thing.

You say there’ll probably never be another band as big as Oasis. Do you feel that way because of the more fragmented times we live in?

Partly that and partly because there was a very bizarre chemistry that happened at that moment where it felt like things were changing. It was the end of an era. You definitely felt like there was a new spirit on the street and Oasis happened to land at exactly the right time.

If they appeared now, arguably, they wouldn't have the same impact. They might still have fans but nothing on the scale where you're being invited to No.10 or where you seem to define an era. So they were lucky in some ways, but they had to have those tunes and that attitude for it to really catch fire.

Bonehead says in the film that he thinks the band should have called it a day after Knebworth. Do you agree with that?

Personally I love the later albums, so not from my perspective. But I can see it and there's something really beautiful and poetic about saying that you have that sweet moment in time, why ruin it? Why carry on? But then again, Liam's view was always, What were we going to do - become plumbers? Fuck that, I wanted to be a musician. Like Noel says, Ride it until the wheels come off. You've got this opportunity, why would you want to do anything else?

Were you surprised at the sheer wealth of archive material available?

Yes and it surprised them as well. Liam's comment when we met him the first time was, This film should have been made 10 years ago, but it's impossible to make because no one ever filmed us in the early days. I don't know how you're going to make it. I said, Well, at least give us a shot. If none of this footage exists then we'll call it a day. We were lucky that some key moments in their lives, by pure chance, happened to have survived. In certain cases, such as Amsterdam [when all of Oasis, bar Noel, were arrested on a ferry in 1994], there was no way anyone was going to be filming some random, up-and-coming band, so we had to be a bit more inventive.

One of the amazing things for me was sitting down with them separately and showing them some of that footage to try and jog their memories. They both seemed quite moved by seeing the love and camaraderie that they still had in those days. That was something that I guess, through all the recriminations and the bitterness later on, they'd forgotten about. It was a good way to start things rolling and go, Let's try and remember some of the good times as well as the bad.

Did the band take much persuading to co-operate?

No, it was interesting; one of the producers, Simon Halfon, used to design the record sleeves so he knew the whole band. They’d talked about making the film and when they approached me I was incredibly keen, but the focus for me felt like it should be those early days. The other question was, Is Liam going to be up for it? And Liam said, Look, if you're going to do it, you've just got to do it right. It's a big deal for them to trust us with their lives, but from the moment they said yes, they never wobbled, they never wavered. They’ve got a volatile reputation, they could have walked away at any time, but they were as good as their word. It was amazing.

One of the notable things about Supersonic is the number of contributors. It’s definitely not just about Liam and Noel...

I wanted to interview everyone. Obviously you don't know going in what's going to survive and we interviewed many more people than are in the film and some of our best interviews didn't make the cut, just by the nature of making a film. I think the danger is you have too many voices and it becomes confusing, too few and then you're not really telling the whole story, so that was a balancing act that we had right up until the end.

No band is just one person. No band is just two people. I've been lucky enough to travel and film different bands and you come to realise that the three or four or five people on stage are only one part of the puzzle. There are all the people who are doing the paddling around and frenetically trying to keep this vehicle on the road, that's part of the story and they were very generous with that. They hooked us up with all their old crew and producers and so on, and wanted to make sure they were all part of the film.

There were a couple of conspicuous absentees however, original bassist Paul “Guigsy” McGuigan and second drummer Alan White. Did you approach them about taking part?

I haven't met Alan, but I met Guigs a couple of times. That again was a real privilege and I think we came pretty close to getting him to be in the film. He’s got so many great stories, but at the last minute he said, That's part of my old life and I don't really want to revisit it, which is fair enough. But he was very sweet about it. He's exactly as you'd expect from his reputation, a very sweet, lovely guy, but he just considers it part of another life.

Finally, you’ve been quoted as saying you believe Oasis will reunite down the line. What do you think it would take to make that happen?

That's the question. You talk to Liam and he's keen. For Noel, the solo career's going so well, there's less incentive for him, but on the other hand he's never said, I'm never going to do it. He's just talked about this obscene pile of cash that's going to push them over the line. Whether we spoke about it when we were making the film, or whether they've spoken about it publicly, it feels like it should happen. There's no reason for it not to happen.

I think one thing holding Noel back is he was saying that all these bands that get back together, whether it's The Stone Roses or The Sex Pistols, whoever, they never made any money in the first place. They never got a chance to do the big band thing, whereas Oasis were playing to quarter of a million people before they'd really got a chance to prove themselves as rock stars. Aside from anything else, I hope they get together as brothers and spend time together again. But that's up to them. They're grown men, they'll come to their own decisions. It’s not like they've ever listened to anyone else in the past anyway, they're not going to start now.