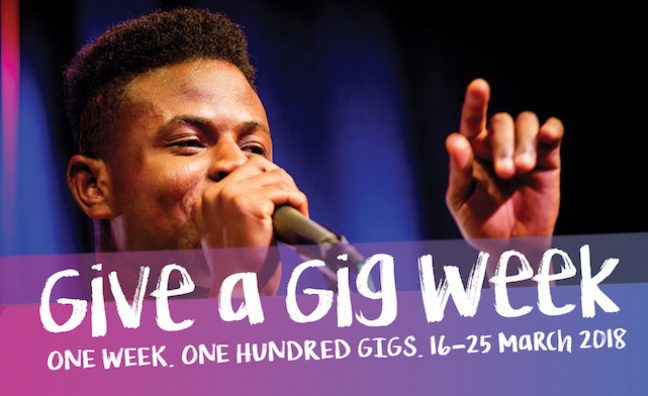 Following last year’s inaugural Give A Gig Week, Youth Music has today (December 12) announced that its flagship fundraising initiative is back for 2018, taking place from March 16-25.

NME has also pledged support for Give A Gig Week 2018, and Youth Music has confirmed that they have been chosen as the official charity partner for next year’s VO5 NME Awards, taking place February 14 at London’s O2 Academy Brixton. NME will also be raising funds for the charity via a host of its VO5 NME Awards Shows taking place January through March in London.

Speaking about the charity partnership, Mike Williams, NME’s editor-in-chief said: “Youth Music is an amazing charity and I’m incredibly proud to be able to say that it’s the official charity partner for the VO5 NME Awards 2018. The work they do at a grassroots level – providing music-making opportunities to thousands of young people who wouldn’t otherwise have the chance and their focus on diversity and gender equality - has made a great contribution towards creating a musically inclusive country and we’re excited to be part of that.”

Give A Gig Week was conceived to put on fundraising gigs to support young people in challenging circumstances, with its first incarnation seeing over 330 acts taking part in 119 gigs in venues across the country including London’s Ronnie Scott’s and Hard Rock Café, Bristol’s Colston Hall, Liverpool Philharmonic Hall and Sage Gateshead.

Key venues already secured for Give A Gig Week 2018 including prestigious London hotspots KOKO, House of Vans and OMEARA, with the charity aiming to have at least 100 fundraising gigs taking place during this one week.

Chris Price, Youth Music trustee and head of Music, Radio 1 and 1Xtra said: “I’ve seen for myself how the lives of young people attending Youth Music projects have been transformed once they’ve had the opportunity to make music. The chance to discover and build on their musical and other talents is invaluable but, sadly, we know there are still many other young people who really need this help.”

Natasha Bent, CODA, added: “I’ve been blown away by how Youth Music is helping so many young people put music at the centre of their lives. The difference this work makes is amazing – inspiring confidence, hope and optimism for the future. Many of us working in the industry know how music has helped shape our lives and careers in exciting, positive ways and it’s our duty to help and be accountable for positive change. I’m supporting Give a Gig Week because I feel it’s important to give something back and help those young people who haven’t yet had the benefit of this great charity’s support.”

Give a Gig Week takes place nationwide from March 16-25, 2018. To register your gig visit www.giveagig.org.uk