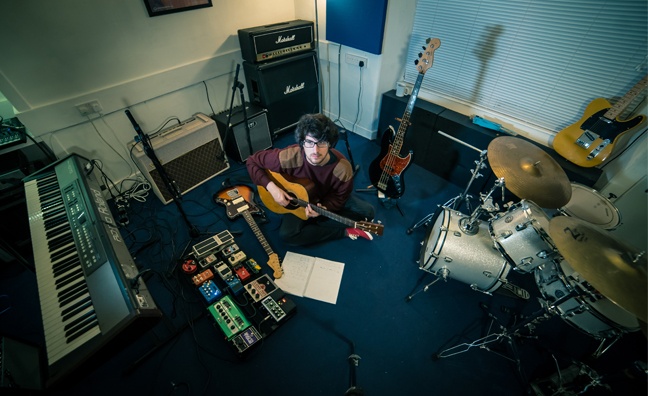 Hailing from Aberdeen, Nassif Younes’ new project SWYM will be releasing his debut single, “Up To You” on the 13th October which you’re able to preview below. The track has been taken from his upcoming EP, “Your Distraction” (10th November) and has been mastered by Nick Watson (Deep Purple, Coldplay, Fleetwood Mac).

Up To You’ could be best described as a confident rock’n’roll anthem; exploring patterns of indie-rock, synth-pop, and progressive-rock, Swym further their sound beyond individual influence, and create something almost familiar in tone, but quite like you’ve never heard before.

Younes started playing guitar at the age of 17 and has done little else since being a latecomer to the world of music, but in a matter of time, he began learning Beethoven Sonatas on the piano and later on, bass and drums. Younes’ first few songs were acoustic, but once he was introduced to looping and recording techniques, the electric-guitar came into use. He now makes his living as a music tutor, classical guitarist, and producer. With the help of fellow bandmates and friends, Younes is joined in studio by Kris Elliot on drums, Scott Bruce on vocals and Byron Burnett on bass-guitar.

Influences range from Led Zeppelin, Daniel Johnston and Alt-J to Leonard Cohen, Bright Eyes and Bob Dylan, also including more complex textures from bands like Radiohead, Tame Impala, Flaming Lips and Pink Floyd. Swym’s sound is made from an excessive use of the ‘60s and ‘70s psychedelic textures and effects such as phasers, fuzz, delays and tape flanging, as well as a few more unique moves such as connecting all of his guitar pedals backwards, using an old 50s wireless radio as a guitar amp, singing pop vocal-solos over jazz time signatures and using dance beats and electronic-production techniques in songs that sound closer to The Stranglers or The Doors. Guitars that sound nothing like guitars and a combination of modern and vintage synthesizers are also recurring themes throughout the record. In what might be labeled as ‘Odd-Rock’ or ‘Quirk-Pop’, Swym’s music is a swirly, fuzzy dive down the sonic rabbit hole with the occasional display of instrumental finesse thrown in.

Single name: “Up To You” Single