"He was the most extraordinary talent of his generation": Sarah Stennett on Lil Peep 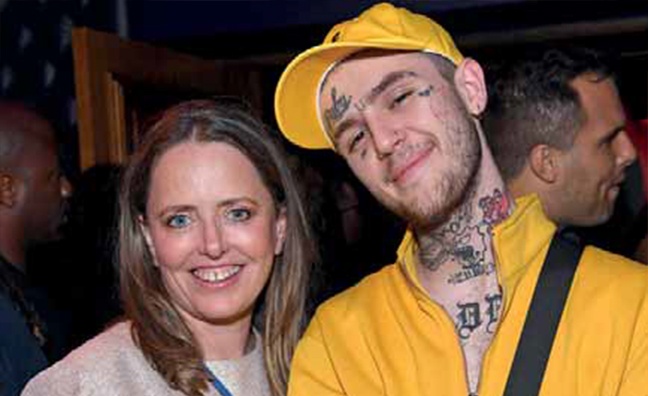 When Gustav Åhr, aka Lil Peep, passed away in November 2017, First Access Entertainment CEO Sarah Stennett  – who had partnered with Peep on a JV to invest in, and advise him on his career – was left devastated. Since then, however, huge interest in his music has kept his team busy managing his legacy. Here, in her own words, Stennett explains how they’ve done it…

"I knew Gus was special as soon as [broadcaster] Travis Mills first showed me a picture of him. He was in a rowing boat and, at the time, he just had one tattoo, a ‘Cry Baby’ one on the top of his head. I thought he was mesmerising.

“His face was so striking and beautiful: I wanted to know why he came to the decision to tattoo something so significant and emotionally expressive on his face. Travis played me something from his SoundCloud. I was nervous because I hoped that the music lived up to the beauty and fascination of this young man. He played me a track called Beamer Boy and I knew within 45 seconds. I went, ‘Just stop. I don’t need to hear any more, I just want to meet this guy, he’s amazing and this is so exciting.’

“I don’t know why, but that day I felt very much like I was waiting for something to happen. From that day on, I got this sense of excitement around what he was going to do. He brought fun, excitement, passion, belief… Peep was, to me, everything I got into the music business for. When I heard the music and when I saw him, I had a very significant emotional reaction that took me back to all those moments in my life that were soundtracked by specific records that really mattered to me.

“That was the start of our journey together. I have never fully accepted his passing and I can easily get consumed by ‘what ifs’. The day it happened, everybody from my office came round to see me. We’d all got to know Gus when he was living in Portobello, he’d become part of our lives and everybody loved him. Once you met him you were under his spell.

Everything Gus left behind has great impact and meaning

“That first 24 hours after he died was very weird. I had no ability to digest it. It was like, ‘What do you mean he’s gone? Where is he?’ My early relationship with him was about trying to find him, because he’d disappear and then pop up doing a show somewhere – he was very elusive. So when he disappeared before it was like, ‘He’s going to come back and I’m going to see him again.’

“I had a few days when I was literally in bed, devastated. And then I got busy. I knew we had a lot planned and the plans we’d agreed. He’d been due to play [US hip-hop festival] Rolling Loud and [that slot] became about making sure as many people as possible got to know the brilliant, creative genius of this young man, whose life was cut short. We wanted them to have the pleasure of understanding this great voice of a generation and that became very consuming for me.

“It became a big event. Skywriters wrote his name in the sky, everybody was looking up and hearing his lyrics and that’s really when I started to understand that we had a lot of work to do. Everybody had the same goal, from [collaborators] Mezzy, Smokeasac, and ILoveMakonnen to his mother, Liza, Chase [Ortega] from The Hyv and [Columbia chairman/CEO] Ron Perry. Everybody wanted to ensure we got the album out in the right way and it was finished the way he would have wanted it to be finished. We had to do justice to his legacy.

“The first thing we did was the video for Save That Shit; it was such an amazing song that it deserved a video. We showed it to his closest friends and collaborators, in particular Smokeasac. He was thrilled to see Gus in that video, he said, ‘I think Gus would love it.’

“So we put that out and then the Marshmello song [Spotlight] happened. It was never, ‘We’re going to do this and this,’ it was a very organic process. Gus was already in a conversation with Marshmello. He’d met him and they were already talking about doing something, so it just seemed to make sense. Marshmello did the track and in his set all summer he was playing the song and had this wonderful, mega-sized image of Gus that would come up on his stage set. It was introducing Gus to a new audience and helping us say, ‘This is who Peep is, this is what his voice sounds like, this is the song he wrote.’ It just seemed right. We never went out with a blueprint, because we were just doing what felt right step-by-step, listening to people who had a good sense of what he would have wanted to happen.

“The Falling Down track happened before Xxxtentacion passed away. I’d been told that there was a track, but I’d never actually heard it, and then when Xxxtentacion died, I got word that he had really wanted to release the track and how much he respected Gus. I was very touched by the fact that he recognised what an important artist Gus was and that he’d discovered Gus’ depth by exploring his catalogue. Of course, we thought about the controversy [surrounding Xxxtentacion], but my personal view was that people can make a decision if they want to listen to it or not. It’s very simple: you either press play or you don’t.

“The thing with Gus is, he left so much work. He made it very clear the next thing he wanted to put out was Come On Over When You’re Sober, Pt 2 and he was very excited about the work that he’d done with Makonnen. There was a lot of music made in those sessions with Makonnen that was really optimistic and fun – they just had a great time and were excited about what they were doing together.

“But, ultimately, the decisions around releases aren’t mine. I’m part of the decision-making process in so far as I can give guidance and information. But Gus’ family, friends and collaborators work together to give effect to his intentions and wishes as best we can. As long as everything is true to what he would have done, then we are making the right decisions.

We never went out with a blueprint, we were just doing what we felt right

“I love everything he did, all the music he created. I was always in awe of him, always wanted to hear what he had to say and see what he was doing. Everything he’s left behind has great impact and meaning. We’ve delivered part of his legacy, but there’s definitely some amazing material to come that is going to be a joy for people to be able to hear.

“I’ve learned you can’t assume special people are going to be in your life forever, so value your experiences. I’m very grateful that I was in a position where I could get to know the most extraordinary talent of his generation. To be around somebody like that was just a pleasure and I’ve learned to be a lot more present in what happens.

“People who knew him will always remember his spirit, his kindness and the fun he brought to a room. If you met Peep you’ll never forget it. Never.

“And I hope people who never got to meet him remember him through discovering his music, what he wrote about and what he meant. That’s a journey I’d encourage people to take. Delve into his work and understand it, because he is definitely a very important artist. That’s undeniable to me. Go and discover Peep, listen to him, watch his interviews, understand what he was doing and saying, because he was a very clever, inspiring young man.”

In a recent edition of Music Week, we took an in-depth look at how estates and labels are managing the legacies of some of music’s fallen icons. Subscribers can read the feature here.