'It's about the quality of the song': Daughter celebrate their Ivor Novellos nomination 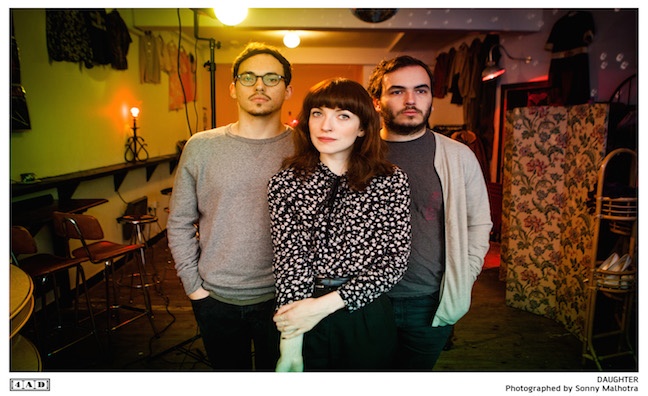 This afternoon (May 31), 4AD act Daughter will contest the Best Original Video Game Score category at the 63rd edition of the Ivor Novello Awards.

Singer and guitarist Elena Tonra and guitarist Igor Haefeli appeared at the nominations ceremony last month, celebrating their status as the first 4AD artist ever to be nominated at the prestigious event.

They appear on the list of nominees among a diverse array of acts including Everything Everything, First Aid Kit, Ed Sheeran, Stormzy and Dave. Revisit the full list of 2018’s nominees here.

Daughter, completed by drummer Remi Aguilella, are nominated for their original score for Life Is Strange: Before The Storm. Back in September last year, the game featured in Music Week’s Sync Story column, with Jon Brooke, Square Enix’s VP, brand marketing calling the trio the ideal match for a game that “evokes a lot of emotion”.

“It was really important to find a great collaboration for original music to capture the raw emotion of our game, and Daughter fit the bill perfectly,” he added.

Their music was recognised at the Music Week Sync Awards last year with a nomination in the Best Sync –Video Game Trailer category, while Feel For Music pair Glenn Herweijer & Ben Sumner, who worked on the title, scooped the award for Music Supervisor – Video Games.

Ahead of the Ivors, which takes place today (May 31) at London’s Grosvenor House Hotel, Music Week spoke to Tonra and Haefeli about what it means to be nominated and how sync can help artists.

You’re the first 4AD to be nominated or an Ivor Novello, what does that mean to you?

IH: I didn’t know that. That’s amazing, really cool, I think what’s nice about the Ivor Novello is that it is about the songwriting and it feels like that little bit more true to the music. I think it’s so weird because it’s for a soundtrack for a video game, I don’t know how many years that’s been around but it’s such a new format. I guess we broke in to the Ivor Novellos [laughs].

How involved were the label with this whole process?

IH: Not much at all in the sense that it was very much the game team that approached us and we were talking directly to them. Then 4AD helped us put the vinyl out physically so we printed it on vinyl for Record Store Day.

This game won an award at the Music Week Sync Awards, are Daughter firmly established in the sync world now?

IH: I don’t know if it’s had an impact, practically speaking, but we’ve always loved seeing our music used for pictures in the past, so to then write something for picture is really exciting. I think now that we’ve done it once, we could do it again and we’ll feel more prepared for it. If we could do it in some kind of format in the future, that’ll be amazing.

Sync is really beautiful to spread your music in different ways

When you started the band did you think your music would be used for sync and do you think it’s something for other artists to look into?

IH: I think it’s become a lot more common with the explosion of TV shows and it’s such a used format and so many people watch it and are involved with it. Sometimes, like with Game Of Thrones, people get so, so into it and are very attached to it and to have syncs crossing different genres and very popular music together is really cool.

ET: I also think people will cross you accidentally that maybe would never have before. There have been a lot of comments of people who said “I saw you on this show” or “I heard you on a film”. I think it’s a really good thing to do. Sometimes there can be a negative view of it, selling out in a way - I really don't see it like that, it’s really beautiful to spread your music in different ways. We get approached for really emotional scenes and I feel like we’re really lucky; we get a death or a break-up scene…

IH: When we write music, we’re not thinking, ‘We want this to be used for a TV show’. We do it because we feel like doing it and then if someone decides that fits with what they’re trying to express within their medium, that’s awesome. There aren't a huge number of reasons to say no apart from if it stands for something we don't believe in, which has happened as well.

How important is it that ceremonies such as the Ivors recognise songwriters?

IH: It’s maybe in contrast to some of the other awards, [because] it feels like it helps certain writers and artists get recognition that they fully deserve. It feels like it’s less driven by the success of the record and it’s more about the quality of the song, and I love hearing that there’s a different jury for each category.

Stay tuned to twitter.com/musicweek and musicweek.com throughout today for the very latest Ivors coverage.