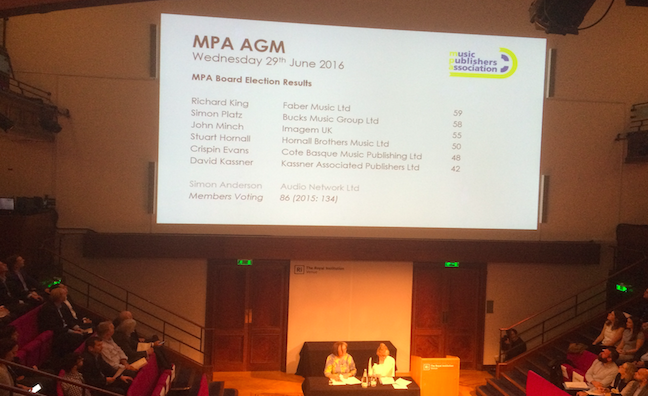 The MPA announced the results of its latest board elections at its AGM yesterday, which took place at London’s Royal Institution.

The AGM saw a total of seven MPA members stand for six elected director vacancies on the MPA Board.

Also announced were recipients of 2016’s Richard Toeman Scholarship, with Clemmie Woodhouse (UMPGM) and Grace Roberts (Institute of Contemporary Music Performance) winning the publishing and student categories respectively. Their prizes will include a financial contribution towards training and education, and discounted participation in MPA-related events.

Meanwhile, in her AGM speech, MPA Group CEO Jane Dyball revealed that A&R investment by British music publishers is at an all-time high in her MPA AGM speech this afternoon.

In an address that highlighted the growing importance of international revenues, Dyball also revealed that the value of sync revenue and direct licensing among the group’s members is on the up.

“A&R investment by British music publishers is at an all-time high and, give or take the odd million, equal with that spent by British record labels,” she said.