'They'll have to increase the size of the Ivors' stage': Universal's Mike McCormack on the co-writing revolution 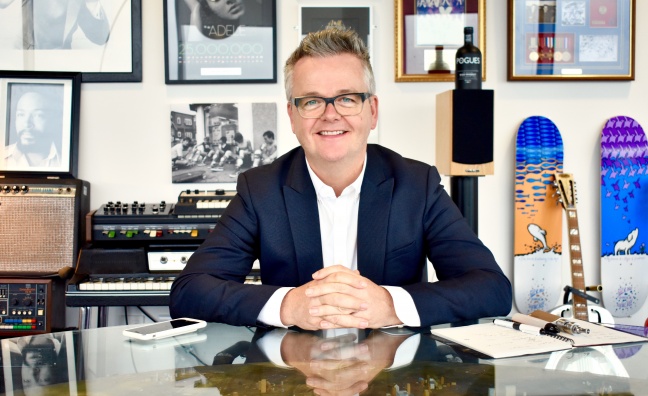 Music Week’s revelation that it now takes an average of 4.84 songwriters to write the UK’s biggest hit songs has been the talk of the industry this week.

Songwriters themselves are divided on the issue. Some, such as Diane Warren and Nerina Pallot are against the proliferation of writing credits, believing they make the charts more homogenous. Whereas others, such as Music Week cover stars Scribz Riley and Rachel Furner, acknowledge the practice brings results, both commercially and creatively.

So, what about those who are at the sharp end of the songwriting business: music publishers? Mike McCormack is UK MD of the Universal Music Publishing Group, and a man who has worked with artists and writers as varied as Adele, The Killers, Lily Allen and Dangermouse.

Music Week sat down with McCormack on the eve of this year’s Ivor Novello Awards to talk samples, songwriting and why it sometimes takes “a bloody football team” to write a hit…

Is co-writing now the only way to have a big hit?

“I don’t think so. Within the urban world it’s so prevalent, because there’s so many people who do specific things and there’s so many samples used, which does skew the figures. But if you look at one of the biggest hits of the moment, certainly from a British songwriter, Leave A Light On [written] by Tom Walker and Steve Mac, that’s very simple. Two guys got together and created a great tune, it’s been No.1 all over Europe and it’s a 50/50 co-write. So it’s not that it can’t happen anymore, it’s all just a means to an end. But then there’s some songs [where you think], ‘God knows how many writers that’s got on it’. It’s like a bloody football team.”

UMPG have an interest in Liam Payne’s Strip That Down. What does having 15 writers on a song do to the finances?

“Listen, it’s still good for us. You can have a track written with three or four people and then there’s another two or three added just before release because the label want a featured artist to get it a higher profile across all genres… That’s what happened with Strip That Down – that’s a song that Ed [Sheeran] and Steve [Mac] wrote together. [Someone realised] it’s a little bit like the Shaggy track It Wasn’t Me, so then we had to contact the publishers, clear it with them and give them a share, then we had to give Quavo a share for the rap that he did… And that’s how you end up with everyone’s shares being diluted. It’s a very refined, very scientific way we’ve got of releasing records right now. There’s so much riding on it that nobody wants to leave anything to chance, so they’ll use any bit of ammunition they can to make it work. But I’d still prefer 15% of a massive hit than 100% of nothing.”

Doesn’t it make it harder for new songwriters to make a living?

“It’s very tough. A lot of the writers probably have to give away much better shares than is deserved. But that’s the competitive world we’re in. And I don’t think it’s ever been easy for any writer to break through. The writers will come to the conclusion that they’re better off having 20% of a hit and having their name on it and, if they’re any good, they’ll have an on-going career. Whatever they give up in the short term they’ll gain in the long term.”

Can you see any end to the trend?

“I certainly can’t see it changing in the short term. That pre-emptive clearance thing is something we’ll see more and more of. If I could find the next Rod Temperton, someone who wrote 100% songs, I’d be the happiest publisher around. When we first signed Adele she wrote 100% on her own, she didn’t even know what co-writing was. She wrote Hometown Glory 100% on her own but she’s worked out that co-writing ups her game dramatically. She’s perfectly capable of writing on her own, but she likes to use collaborators just to get that extra 10, 20 or 30% that makes it a massive worldwide hit, as opposed to a niche UK hit.”

It’s certainly hard to argue with the results…

“It’s incredibly difficult to do it on your own. People need to have chemistry working with other people, they need positive feedback and criticism of what’s a good and bad idea and that’s worked for a very long time. But it does worry me when we’re getting to 10 or 15 writers because you really can’t see who’s done what. They’re going to have to increase the size of the stage at the Ivors to fit all the bloody co-writers on if things carry on as they are. It’s crazy.”