On The Radar: Black Futures 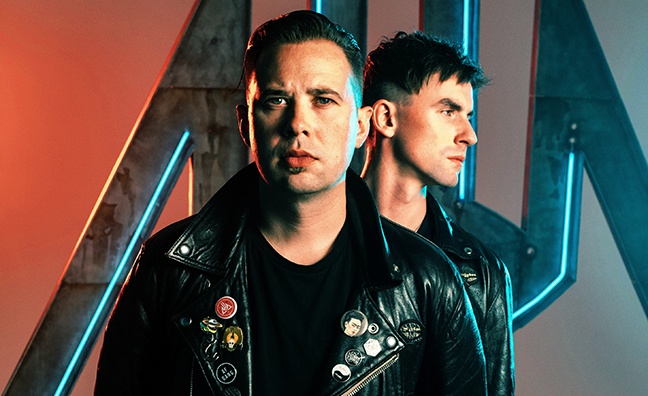 From playing on the pavement outside a record label’s conference (Elvis Costello), via issuing OS Map references (British Sea Power), to cross-dressing (Marina Diamandis), artists have gone to novel lengths to woo record labels. Few – that we know of – have successfully kidnapped A&R folk, yet this was Black Futures’ successful ploy. Having lured their victims to a London pub, would-be suitors were blindfolded, bundled into a van and driven to a secret location to watch the electro-rock duo live.

“It sounds quite scandalous, doesn’t it?” laughs one half of the largely anonymous band who goes by Space (his bandmate, naturally, is known as Vibes). “It was all done in a friendly way with some light blindfolds. We have our very kind lawyer to thank for inviting everyone down, which showed quite a lot of faith because he hadn’t seen the show,” Space adds. “We were just trying to create the perfect environment. Doing a showcase to 30 industry people wasn’t going to translate. We wanted to create an immersive experience. We’d orchestrated events so as to pluck people out of their ordinary existences, then dropped them in an alien environment where nothing was as it seemed – then they got blasted by a full on rock show. It seemed to make a big impact.”

It worked so well that Black Futures’ regular gigs have been similarly immersive, boasting venues dressed as quarantine zones and figures in hazmat suits dancing in the crowd. It’s won them not only a hardcore fanbase who style themselves The Black Futures Existential Expedition Club, but the affections of Sony’s Music For Nations, who were suitably wooed by their blindfolding. “The whole team seem to intrinsically get what we were trying to achieve. It was the perfect fit because of their track record for breaking things that are out of the ordinary,” explains Space, adding label and band truly inked their deal. “There was a ritual performed when we signed involving mezcal and tattoos…”

Needles of a different, record-playing kind will be utilised this summer when Black Futures release their self-produced debut album Never Not Nothing on August 30. “The modus operandi was to go big, it’s a maximalist record,” declares Space of the 11 track album’s mix of full-blooded rock and electronics that includes guest vocals from Primal Scream’s Bobby Gillespie. “We wanted a vital energy at the shows and on record that meant you either have to get involved or run for the hills!”

With Download and Glastonbury festival slots coming up fast, Black Futures are in fact bringing the tribes together, so much so that abduction is no longer on the duo’s agenda. “Kidnapping was day one, now it’s more of a joyous rebellion,” muses Space. “It’s all choice from here on in.”