On The Radar: Husky Loops 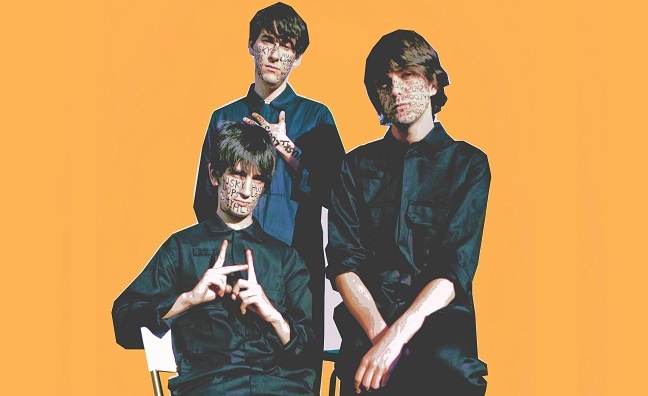 What with increased competition and the relentless cycle of predictions about the death of guitar music, it’s no surprise new bands are having to do more than ever to survive. Few though, have ventured into fashion, which alone makes Peckham-based newcomers Husky Loops stick out – particularly when the catwalk is in their sights.

“I designed my own boiler suit and two-pieces, I’m getting into fashion, which sounds ridiculous but I’m serious, it’s not just a hipster thing,” declares the trio’s frontman Danio Forni, who with drummer Pietro Garrone and bassist Tommaso Medica proudly wears their word-emblazoned creations at gigs. “I know the main designer at Gucci, he gives me a hand. It’s all based on words and sentences from the album.” Spring/summer 2020 might be stretching it, but going by Husky Loops’ creativity and ambition so far, a collection should not be discounted. After a series of EPs and mixtapes, the trio released their kaleidoscopic debut album I Can’t Even Speak English in September. They’re midway through touring it when Music Week drops in for a chat.

Some might say they’re genre-crossing, but the band’s range simply represents the breadth of their musical scope. “I don’t really like to see it as a crossover,” says Forni, who recently followed in the footsteps of Liam Gallagher, Freya Ridings and Celeste by creating a (very eclectic) Takeover Mix for BBC Sounds. “In modern times, everything is so mixed and I don’t like to see it as different genres. That’s why us three are in a band together, we don’t see boundaries, we see art and music.”

With Forni also serving as producer for an array of MCs and rappers including Arkansas wordsmith Kari Faux, their unrestricted artistic vision is inspired in part by the trio swapping “playing in really loud punk bands in front of no one” in their native Bologna for London. While Italian style underscores the band – legendary Rieti-born singer Lucio Battisti is a key influence – the British capital, and its grime sound particularly, has made its mark. “We’re not from here, so we need to experience London to the max,” explains Forni. “We need that extra kick every day to really, really feel it. Everything is going on: different music, fashion, food... It’s in your face all the time. Experiencing that every day makes us do a lot of varied things.”

Shedding the ‘guitar band’ stereotype is chief among them, hence the collaborations, a new podcast and possible fashion line. “We don’t want to just be identified as a band,” suggests the frontman. “In 2019, bands have to work so hard, but when you’re not from the country you’re living in and you want to do something different you have to work four times harder!”

If that begs the question, ‘Why be a band in 2019?’ Husky Loops have the answer: the artistic challenge. “You have to take a risk,” grins Forni. “The only thing you can do as an artist is experiment and change. I don’t want to just keep doing the same things. It’s not going to make me better, which means the songs won’t be better. What we do is more for the long run, I hope it’s still going to be great in 40 years, that’s our vision.”