On The Radar: My 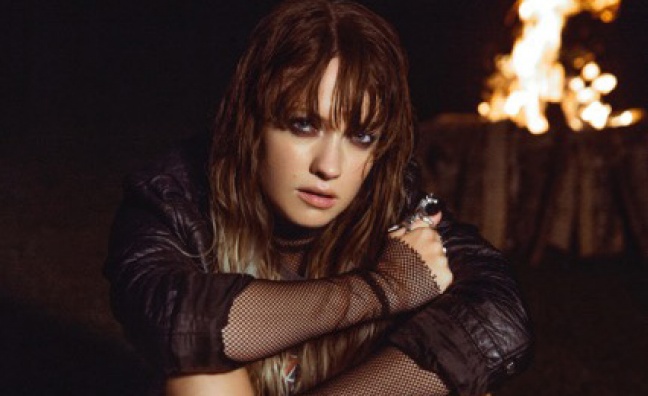 “I’m a big emotional rollercoaster, angry, sad - everything! I’m also a crier, either at animal videos on YouTube or sad movies.” My Helmner is describing her emotional disposition down the phone from a Stockholm studio.

Today though, she’s all hyperactive excitement, enjoying recording bubblegum-sticky pop-rock songs for a debut album due on Relentless Records in 2017.

The 24-year-old’s 100mph personality was shaped by growing up surrounded by snow, wolves and wildlife in the remote forest village of Branäs, nearly 300 miles from Stockholm.

“There were 10 people in my class, I loved being outside and skiing!” she says.

As well as skiing (still her favourite outdoor pursuit, incidentally), the young My wrote stories, film scripts and soundtracks.

Her first song was “an instrumental on my grandma’s piano” and she started her first band as a 16-year-old equally obsessed with Nirvana and Refused as Backstreet Boys and Britney Spears.

She still attaches huge importance to words, and gushes about Bob Dylan’s Nobel Prize for literature because it “means [people] appreciate poetry”.

But it doesn’t take long for another p-word to come up: “I’ve always been about melody, in Sweden we have a tradition for pop!”

My is certainly doing her bit to uphold it. Should anyone ever pose the question ‘what would My Chemical Romance sound like fronted by Robyn?’, recent single White Water would provide an adequate answer. So would Pretty Little Liar, which came out in May.

So, does she think Swedish musicians have an innate knack for hulking great melodies? “I don’t want to say it’s something magical or in our blood but I guess it’s in our culture,” she explains.

“We have great music schools and great studios, equipment and tools. Then there’s old Swedish folk music and Abba... We’ve captured pop through the generations.”

My isn’t content with conquering just pop, she wants to dominate rock too. “I’ve always been a rock chick,” she says. “Alternative music, emo, punk… I’ve always looked up to that.”

The three played together in rockier previous group Indevotion, but My’s pop instincts led to the conception of a new project. Writing Pretty Little Liar sealed the decision to rebrand as My. “It was the first song we thought wasn’t suitable for the old band,” the singer remembers.

“Sam [Tewari, A&R] from Relentless saw it online and said it sounded like something written by Max Martin! A couple of months later we started working together.”

The trio have spent the 18 months since writing more tracks like it, crafting an album My says will be “playful and epic, the perfect combination of rock and pop”.

The decision to follow that dream under her own name has already led My to uncover gender inequality in the industry, and she intends to address it.

“I’m not the only female feeling alone in this world and you can’t change everything in a day, but that doesn’t mean we shouldn’t dream big. Change is what I’m aiming for,” she says.

My is coming for the music business, and in more ways than one.