On The Radar: Nasty Cherry 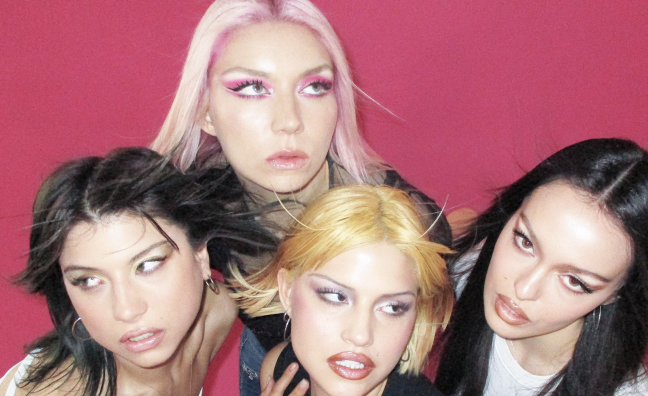 You know that that famous pap picture of Lindsay Lohan, Paris Hilton and Britney Spears wasted in the back of the car with their skirts up?” laughs Nasty Cherry bassist Georgia Somary, against a virtual ocean view backdrop. “I like to imagine they were listening to our band when that photo was taken...”?

Nasty Cherry are playing around with Zoom backgrounds as three quarters of the band dial in for a chat. Somary and guitarist Chloe Chaidez are in LA and drummer Debbie Knox-Hewson (who tells us she’s been using a background showing the Cheeky Girls and Boris Johnson doing the conga) is in London. Singer Gabi Bechtel, who also lives in LA, is nowhere to be seen. In Nasty Cherry, chaos reigns.

This band is unconventional in every sense. They crashed into the public consciousness last November, starring in Netflix’s I’m With The Band – where they were mentored by Charli XCX – and dropping their debut EP Season 1 soon after.

“It’s so nice to have a pop star giving us advice, sometimes it does take a second to remember that this is mental, you forget most bands never have this,” says Somary. “She’s really taking a risk?and puts so much effort into all four of us, which is just insane.”

Blending documentary and reality TV, the show saw the band getting to know each other at LA pool parties and rollicking jam sessions, fighting to get their music off the ground. Next month, they’ll release their second EP, Season 2, having honed their pop-rock sound for a hypnotic five-track record.

We’ve always been really unapologetic in our songwriting

“The first one was kind of a happy mistake, a mishmash of everything we had at the time,” smiles Knox-Hewson, looking back.

“We’ve definitely learned how to be a band more, everyone’s personalities are coming through creatively a bit more now,” states Somary. “Whether it’s a visual or sonic element, it feels like everyone’s got their voice.”

Two tracks from the EP are already out: I Am King, which references self-love and was produced by 100 Gecs’ Dylan Brady (Chaidez is a “huge fan”), and Shoulda Known Better. Both show cohesion and progress, Nasty Cherry are moving up a level.

“We’ve always been really unapologetic in our songwriting, and because this band is so young, we’ve never really been scared to do anything, which is cool,” says Knox-Hewson.

“The thing about coming out of a TV show is that you’re filled with worry about what will people think at the start of the band, which is not normally what happens,” says Somary. “But, as time goes on, we’re losing a lot of inhibitions.”

Putting their hang-ups aside and unashamed songwriting to the forefront, Nasty Cherry have been concocting ways to promote their EP from home, creating a DIY music video for I Am King.

“It was a nightmare!” Somary laughs. “We all bought lights from Amazon and were basically alone in our rooms really going for it, but it was fun.”

“I got someone to drive me around a cul-de-sac singing in the back of a Kia, which felt quite British,” laughs Knox-Hewson.

Music videos aren’t the only way they’ve been connecting with fans, as Zoom parties and TikTok have also helped send their music far and wide.

“Chloe has been sending us viral on TikTok,” explains Knox-Hewson. “I’d wake up to notifications about Nadya [Tolokonnikova] from Pussy Riot or Rebecca Black joining in with our dances. It’s bizarre and amazing.”

And Chaidez is clearly enjoying the challenge of keeping things interesting during lockdown. “We’re used to playing shows, doing shoots and all this glamorous stuff, so it’s definitely different just staring at your screen,” she says. “But these different ways to interact with our fans are fulfilling.”

The EP was finished back in January, and has the energy of life before the pandemic, lurching between punchy glam rock and infectious pop-punk. Fuelled by a curious potion of inspiration including Destiny’s Child, Hilary Duff, Mary-Kate and Ashley’s Passport To Paris and the Bratz dolls, Season 2 is sure to bring some shameless joy this summer.