On The Radar: Sloes 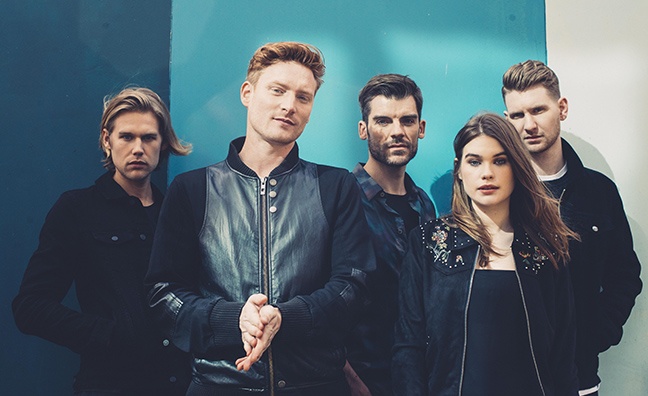 If you were in any doubt as to just how much indie quintet Sloes want to succeed, look no further than band member Jo Milnes. Milnes is actually a guitarist, but in Sloes? Well, let’s just say he had to follow something of a bass-ic instinct. “We went through every drummer and bass player in London,” he laughs of their early days trying to cement a line-up. “We got so frustrated with the lack of success in finding a bass player, in the end I was like, Fuck it, I’m going to play bass. And that was it, I put myself on bass by default.”

It speaks volumes about the determination of this London-based band, completed by Jerome Clark (vocals/guitar), Paul Hand (guitar), Luke Coare (drums) and Katie Milnes (violin). Citing influences as varied as Nick Cave, The National, Radiohead, Arcade Fire and The Maccabees, Sloes serve up a dreamy, melodic confection - further distinguished by the presence of Jo’s sister Katie on both co-vocals and violin. It’s so unique, in fact, that their 2015 debut EP Chasing Tails caught the attention of Peter Loraine, MD of Fascination Management - manager to the likes of Goldfrapp, All Saints, Steps and The Saturdays. Loraine knows exactly what he saw in the band. “Their appeal is undeniable,” he tells Music Week. “They posses a unique ability to straddle folk, pop and indie with rich harmonies and dramatic strings at the core of their sound. At Fascination Management we are 100% committed to breaking Sloes. We think they have the ingredients to be the UK’s next big festival headlining act.”

Their assault on the big leagues officially starts with the release of this month’s beautiful EP, All In The Mind, and latest single Where To Start - a song that tackles the spectre of grief while also pushing their sweeping sound further than ever before. This is thanks, in no small part, to their work with producers Hugh Worskett (Michael Kiwanuka/Will Joseph Cook), and Jim Lowe (Stereophonics). “Hugh wasn’t scared to say, Guys, this is shit, try again,” laughs Milnes. “Egos were left at the door. Pride was left at the door. Pre-conceptions on what we thought was good were left at the door and that was amazing because it kind of pushed us to write more, and not settle for the first or second or third thing we came up with.”

Ego, it seems, was a worthwhile sacrifice, just check out the band’s wistful single Young to find out why.
“It’s about London and the club scene, not coming to an end, but very much changing and some closing down. Say Goodbye is about that as well. It’s about the area that you once loved, how it changes. Not necessarily in a bad way, but it just changes, and that nostalgia of it not being what it once was.” On the back of it, Sloes have just played the biggest shows of their life - performing at British Summer Time Hyde Park with The Killers and supporting Goldfrapp at Somerset House. It’s the latest step towards their ultimate goals: a record deal, a full-length album and lots of touring. “It means everything,” concludes Milnes. “The feeling of progression is so satisfying. It means that we’re not giving all this time and effort and energy for nothing."