On The Radar: The Academic 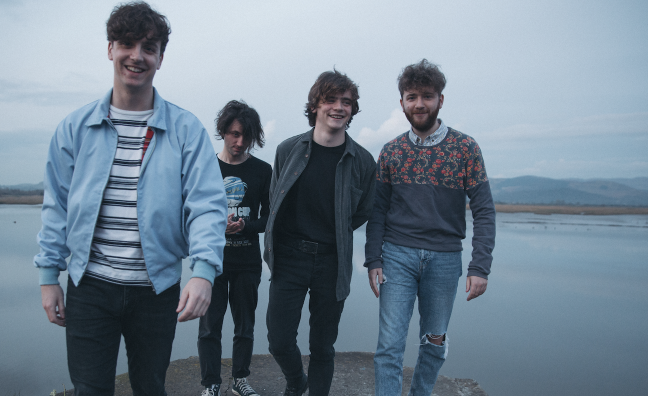 It might sound obvious, but not every band you see playing at a parish council fête will make it big. Neither will every group of kids in Converse peddling covers on the back of a truck in a random field. Spare a moment, then, to consider The Academic, a new Irish four-piece specialising in groove-heavy indie rock who’ve just won themselves a major label deal with Capitol UK after such auspicious beginnings.

“We played at fairs where people were selling cakes, we’ve played in a truck a couple of times, at these gatherings of people at random Irish festivals where they’d celebrate the heritage of certain places...” singer and guitarist Craig Fitzgerald tails off, laughing at the memory.

“It couldn’t have been more Irish,” he says. “A group of strange people standing around in a field, listening to music nobody’s heard of.”

If that sounds a bit, well... shit, it was, but The Academic – completed by guitarist Matt Murtagh, his brother Stephen on bass and drummer Dean Gavin – quickly moved on to bigger and better things. They’ve supported the Pixies and Noel Gallagher’s High Flying Birds and, in 2018, were handpicked by The Rolling Stones to open on the first night of their No Filter tour. It’s fair to say they’ve come a long way since forming as teenagers when Fitzgerald met his bandmates after moving from Dublin to a village called Rochfortbridge in Westmeath, in the middle of Ireland. Mullingar, their nearest town, is home to Niall Horan (who’s shared the band’s songs online). Fitzgerald acknowledges that his band might be another local success story.

We didn’t care about money, we just wanted to be able to get to the next gig

“People probably are talking about the band here,” he says, speaking to Music Week during a break from songwriting locked down at his family home.

“We’ve been together for a long time and it’s safe to say it’s a tricky thing to get up and running in the early days when you don’t have much of a following. We were very brutal in the beginning, we didn’t care about money, we just wanted to be able to get to the next gig. After a while, the hard work paid off and we could play gigs and put money into going to the studio and touring in the right areas.”

All those tiny gigs did pay off: after independently releasing their snappy debut Tales From The Backseat and traipsing round America in a crappy van, their big break arrived.

“We’ve done a lot of industry gigs, but we never felt comfortable and were happy to go it alone for a little while,” Fitzgerald explains. “We were playing at Scala in London last year and we didn’t know anything was going down, but Capitol were at the gig and they wanted to meet us afterwards. It was my birthday, so I was in celebration mode rather than trying to impress anyone, but I’ve got no complaints, it feels like a perfect match.”

Their new EP, Acting My Age, veers past their beloved Strokes towards New Order, Talking Heads and Elvis Costello and Fitzgerald is excited to usher in a new phase.

“We’ve adapted as a band that can record on the road and get music finished in random places and these new songs have a uniqueness to them,” he says, describing the piecemeal, pre-lockdown recording process. “The lyrical content tells the story of where we’ve been at as four young men over the last two years, living out of bags and travelling around the place.”

Fitzgerald paints a wholesome picture of life in The Academic, and says arguments are invariably sparked by Fantasy Football and barely last 20 minutes. Perhaps debauchery and distress is to come, but lately the band have been sharing their celebrity lookalikes with fans, amidst livestreamed gigs and making videos from home.

“One of the guys said that Dean is pretty much a dead lookalike for Connell from Normal People,” says Fitzgerald, who’s finally got round to watching the viral drama. “It’s definitely a stereotype, but he does look like him and the way he speaks – it’s called a bogger accent – fits in too. It’s all incredibly Irish.”

But now that Normal People is finished, perhaps it’s The Academic’s turn to send the world giddy...