On The Radar: The Aces 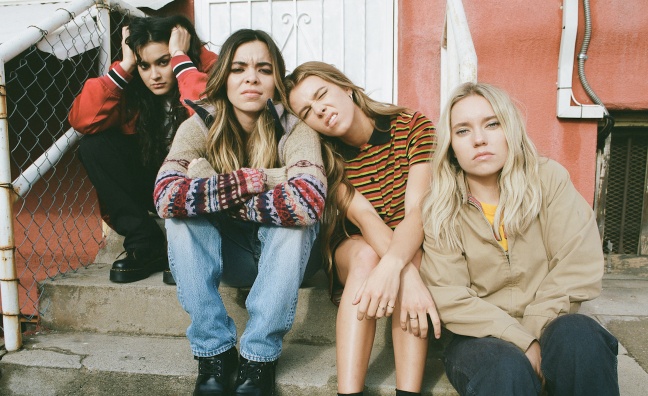 A quick online search reveals that The Aces have been boxed into every female musician stereotype there is. Girl gang, girl group, girl band, you name it. But with the upcoming release of their second record Under My Influence, the four-piece are coming out fighting.

Catching up with Music Week via Zoom from their homes in Provo, Utah and Los Angeles, California the band cut straight to the chase. “We played a show in St Louis, Missouri a couple of years ago and someone from the crowd yelled, ‘You’re lucky you guys are hot.’ I was like, ‘This is still happening?’” recalls lead vocalist Cristal Ramirez. “This girl in the crowd was like, ‘Fuck you!’ and got them kicked out, which was really cool [laughs]. But, there’s still a lot of work to do. We want to keep getting on stages so as many people [as possible] have eyes on us as women who play instruments.”

Fighting off social constraints is nothing new for The Aces – completed by Cristal’s sister Alisa on drums, guitarist Katie Henderson and bassist McKenna Petty – who grew up in the conservative city of Provo, and this record is their most vulnerable yet. It’s been two years since the release of their debut When My Heart Felt Volcanic, and now they have “more life and relationship experience” to draw on. Documenting Cristal and Alisa’s queer experiences was the first step. “To take it out would be to censor ourselves or to dull it down so people didn’t know the full story,” explains Alisa. “We weren’t interested in doing that this time.”

From lyricising Utah’s repressive culture on sultry blues track 801, to examining mental health on raw pop anthem My Phone Is Trying To Kill Me, the record is an open journal.

“I’ve been surprised to see our fans just absolutely loving it and totally accepting it. It’s been really nice. Or maybe the haters are just staying quiet?!” jests Alisa.

“We wanted to make something really different and to challenge the idea of what The Aces were and could be and I think we’ve done that, so I feel really proud,” beams Cristal.

Lockdown has brought its own challenges, which the band have met with full force; making a DIY music video and texting it to fans, starting a ‘digital wellness tour’ and playing an acoustic set for MTV. “Nobody knows the right way to do it, so the world is our oyster and anything is possible,” says McKenna.

With more than 3.5 million streams across its three singles so far, this might just be the record that ensures the world gets to know The Aces. “Seeing the fans’ responses has been really inspiring and when I wake up they are my biggest motivation,” says guitarist Katie. “People need things to look forward to because there’s so much going wrong, so it’s been awesome to give fans the music.”

Locked indoors, using video calls to work on new music and looking forward to what lies ahead has had the band in a state of reminiscence. They’ve been scrolling through old iPhone photos, tirggering memories of shows past. “My whole life’s most cherished moments have been with this band and I have so much emotion looking through all the amazing things we’ve done together as four best friends,” says Alisa. “It’s been such an amazing ride.”

So what’s next for this burgeoning alt-pop band? Not content with dreams of taking their music “to as many countries as possible”, The Aces want to transcend planet earth entirely. “The first gig on Mars...” offers Cristal, allowing McKenna to finish her sentence. “There’s no coronavirus there!”