How Blossoms bloomed: Inside their No.1 album campaign 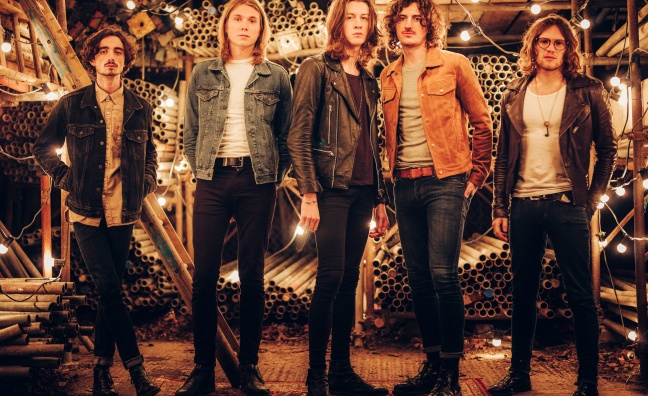 Manchester indie five-piece Blossoms recently managed to halt the revolving door that is the official albums chart No.1 spot with their eponymous debut album. And, says Nick Burgess, SVP of A&R at the band’s label Virgin EMI, the success was a pay-off for years of set-up work before the album was released.

“The management did a fantastic job of setting the band up right before they went anywhere near record companies,” he told Music Week.

“They had already started to create their own fanbase and put the band onthe road for two years before any record company needed to know they existed. So the momentum was already there when the record company gets involved.”

With albums seldom retaining the No.1 spot on the albums chart beyond a single week in 2016, Blossoms’ two-week stay at the top is an achievement not to be underestimated. It recorded sales of 20,987 in its first week of release and has now sold 33,483 copies, according to the Official Charts Company.

The only other albums to top the chart for two or more consecutive weeks this year are David Bowie’s Blackstar (three weeks) and Adele’s 25, which was No. 1 for two weeks before slipping, only to top it again two weeks later for three weeks.

Burgess believes that the band’s approach to building a dedicated following prior to taking their music to radio stations was a crucial factor in their chart performance.

“They did it the old fashioned way, building a fanbase in their home territory. Word of mouth was one of the most important things. When you go and get radio play and you’ve already got 3,000 people invested in the band that definitely helps. Radio was almost the icing on the cake.”

Despite the fact that Blossoms spent two weeks atop the charts and were preceded by the late Viola Beach, Burgess is quick to play down suggestions of an indie guitar band resurgence, citing their traditional work ethic and modern sound as the key to their success.

“One of the hardest things to do when you are using classic references is to make the tunes sound relevant and great on the radio in 2016,” he said. “It still sounds modern and not retro. It’s a combination of traditional values with a contemporary sound.

It doesn’t seem like there’s some nice market we can feel comfortable about putting guitar music into at the moment.”

Despite the band’s success on the albums chart, some have pointed to the fact that Blossoms’ second week at No.1 was the lowest-selling chart topper of the 21st century. However, Burgess insists that this is merely a sign of the times, and he fully expects that number to keep falling as consumption habits continue to change and evolve.

“There’s a sea change in music at the moment,” he noted. “It [number of album sales] will constantly get lower and lower. Music is not about buying anymore, it’s about accessibility.”

? Virgin EMI president Ted Cockle will be among many industry leaders speaking at the MUSEXPO Europe conference, which runs from September 18-20 at London’s Millennium Hotel. For more information and to buy tickets, please visit www.musexpo.net.